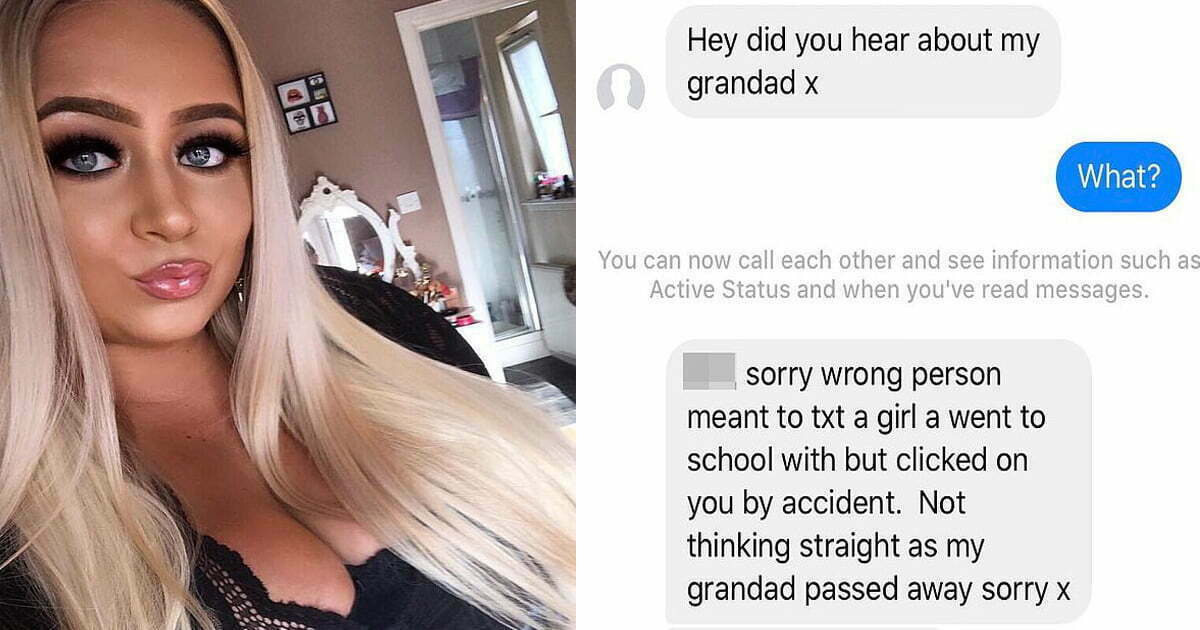 The popularity of dating sites is a result of more and more individuals bidding for love. Singletons critically update their dating profiles, highlighting the benefits and prospects of dating them.

Well, one man seeking for a final fling before being jailed has landed himself into a hot mess. The cheeky chap devised a new strategy to gain attention, all for the wrong reason.

Sliding into the DMs of a young beautiful woman, Rachel Brogan, the inexperienced womanizer discovered he has not only been rejected by the 23-Year-Old but by all internet users after Rachel shared their exchange online.

Rachel received a message from a stranger asking her if she heard of his granddad X’.

Being a clerical officer for the NHS and living in Scotland, Rachel received a message from a stranger on Facebook asking her if she heard of his granddad X’.

Having no idea who she was messaging and to some extent confused, Rachel replied with ‘What?’

The stranger then responded: ‘S**** sorry, wrong person meant to text a girl, a went to school with but clicked on you mistakenly. Not thinking straight as my granddad passed away. Sorry, X.’

Having no idea who she was messaging and to some extent confused, Rachel replied with ‘What?’

Really, an innocent mistake? The stranger added: ‘You are lovely though X” along with a smiley emoji and the unexpected ‘You Single?’

Reacting, the 23-Year-Old gave her strange-aspiring suitor a cold shoulder and stopped the chat. But to the delight of over 32,000 users on Twitter, they applauded her on.

A second said: ‘I suppose he needs a date for the funeral.’

Other users went quite harsh and called the exchange ‘a sympathy gimmick.’

Rachel, who, however, prefers meeting people through apps and in-person also added: ‘I think it was a weird way to get my attention. It doesn’t appear like he meant to click someone else at all.’

Another commented revealing she’s got quite a few ones like that. ‘I have had messages like this on several occasions, lol.’

A fifth shared a screenshot of when a stranger started a random conversation before attempting to flatter her.

Well, I guess a new strategy to gaining attention will have to come up guys, this one is nailed already!