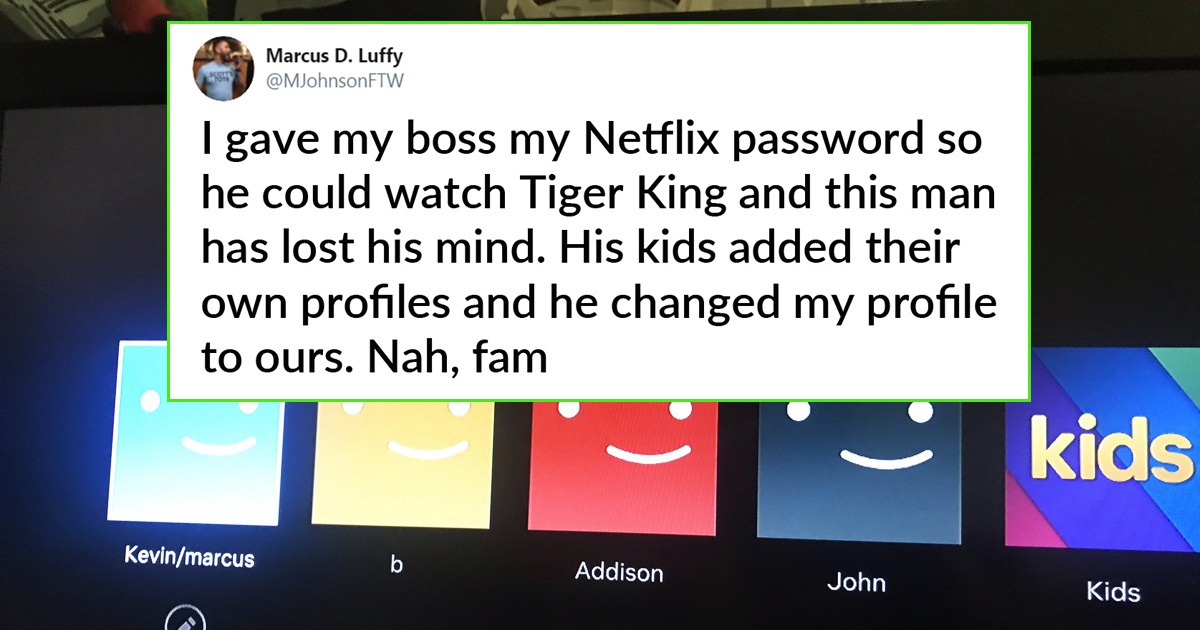 Guy Hilariously Slammed For Sharing His Netflix Account With Boss

People are often repeatedly informed to keep their personal and occupational lives separately. But that can be challenging to do as most people spend a large chunk of hours at work. It’s evidently difficult to keep when one is equally liked by colleagues and importantly bosses.

Well, what happened to this employee’s Netflix membership is entirely hilarious and sure a lesson for every other employee out there.

Just recently, Marcus D. Luffy took to Twitter to explain what transpired when he gave out his Netflix details to his boss, identified as Kelvin. Shortly after, Marcus saw a different account where his profile bio was changed to ‘Kelvin/Marcus,’ instead of the earlier name of just Marcus.

Additionally, the boss equally added his children to the account, resulting in the creation of their own profiles. If you were the one, how honestly will you react?

Shockingly, Marcus defended his boss, explaining they both keep it at the fun level always. ‘We normally prank each other a lot.’ Marcus wrote on Twitter. Marcus went on to reveal how pretty close they are in regard to their working relationship.

He added: ‘I have worked with my boss for seven years and welcome me like family. They give me money anytime I request and even invite me over for the holidays.’

Marcus D. Luffy Took To Twitter To Explain Why He Share His Netflix Details With His Boss

The shared photographs featured a television screen with Netflix’s login window. Multiple profiles can be spotted, with Marcus’s profile combined with that of his boss, Kelvin.

His tweet since gathered reactions of over 25,600 retweets and after realizing all the attention his tweet was getting, Marcus offered more content to water down the feedbacks.

To Prove How Close They Are, Marcus Went On To Share Old Occurrences