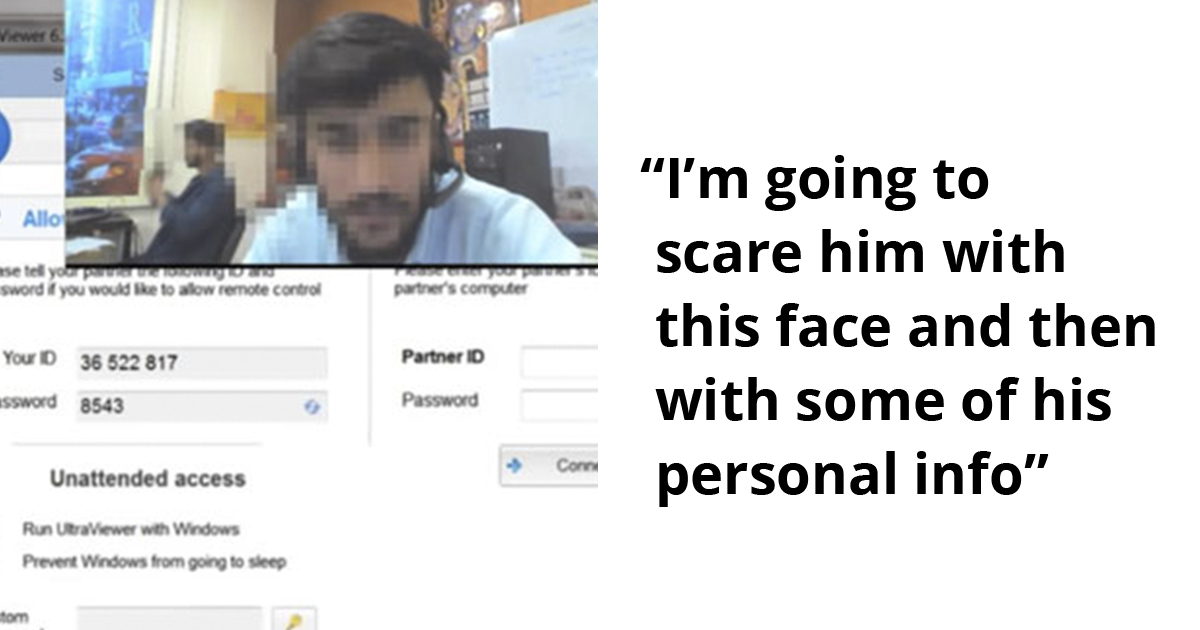 Scammers and voice phishing are common issues in today’s world, where people rely heavily on online purchases. This scammer learned the taste of his own medicine when a YouTuber recorded a video of him through his own webcam after scamming $1000 off his victim.

YouTube Scambaiter went viral with more than 15 million views, showing the face of the scammer for the whole world to see.

Scambaiter called it a “very simple, but smart and dirty Amazon refund scam.”

“First, this scammer sends an email.”

“The scam they run is very primitive and simple,” he continued. “From what I’ve seen, this scam has a success rate that is way higher than most other scams.”

“This email tells people that they have ordered something and if they haven’t done this, which obviously they haven’t, they should call the Amazon refund team and the number is given to them.”

“Once you call this number, you get connected to a call center in India where people like Kedarnath will pick up the phone and do the following.”

Kerdaneth, recorded on the scam phone call with victim.

“Once the scammer is in, and he has changed the victim’s password, he starts sniffing around to the information and looking for an attached credit card to the Amazon account that he can buy himself gift cards with.”

The scammer proceeds to mention all the woman’s previous purchases by looking through her transaction history. This gives the man the credibility that he’s a staff who has ‘official’ information about her.

“Luckily, this victim did not have any credit card attached to her account,” he explained. “When this is the case, then the scammer changes the victim’s Amazon information to make it seem like someone has hacked their account.”

“He will try to convince the victim to let him take remote access of their phone or computer by making the victim install Teamviewer.”

The scammer proceeds to convince the victim to get the Teamviewer app and that it’ll be connected to an ‘Amazon secured server.’ But the victim was smart enough and later told Scambaiter that she took off her credit card because she was suspicious of the call. She changed her password again, and hopefully, that logged the scammer out of her Amazon.

Scambaiter later sniffed around the ‘scammers machine’ and found one victim who lost $1000.

Scambaiter also came upon an Indian identity card of one of the scammers, and that’s where his hunt began!

Along with his ID card, he found other pictures of his personal information, such as his Social Security Number, address, phone number, email, etc. This person made his scam phone calls from Haryana, India.

“I decided to run a GPS scan on a reverse proxy on this camera’s network and those coordinates take us to the very north of New Delhi,” Scambaiter announced.

This location is about 50 km away from Gurbram, Haryana.

After looking into his laptop information and found the name of his Wi-Fi to be the same name as the boss of the operation, Kedarnath.

After that, it’s just classic Facebook diving: he looked for a profile with the fitting name, location, and picture.

Fortunately, the police were actively sweeping the city of scammers, and Kerdanath has not been seen after that. So Scambaiter targeted others who were running a Microsoft pop-up scam.

“I’m going to scare him with this face and then with some of his personal info,” he explained his operation.

Imagine being a scammer, at risk of getting scammed instead:

“Hey, AJ, what’s up man?” Scambaiter greeted them off.

“As you can see, I know who you are, man. I know everything about you. Are you gonna answer some questions for me or not?”

“I know what you do, I know everything about your company. The guy that’s sitting next to you, man. Just answer some questions for me, bro, I can see you right now.”

“But the whole call center did show up in front of the webcam and they cam to look at this whole fiesta.”

Watch the full video below!