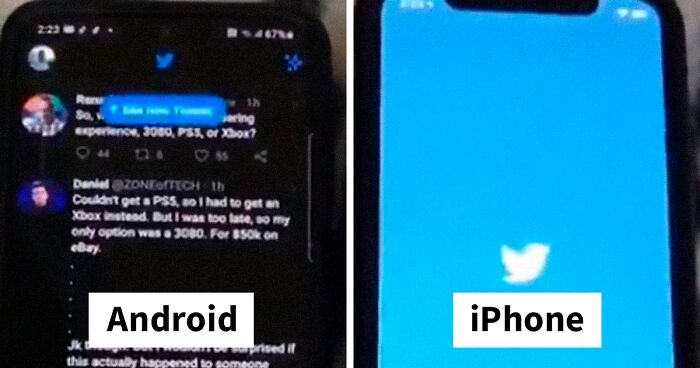 Guy Compares The Real-Time Speed Of iPhone And Android, And The Video Goes Viral

Some people prefer cats over dogs and others vice-versa. Some people like to add milk first before cereals, while others think it is only correct to pour milk over cereals. And then, there is Android vs. Apple users, a tech battle that has been going on for decades.

Ever since smartphones with the Android operating system began to grow popular thanks to their more affordable price range, people are divided. Loyal Apple users are proud of their elite gadgets that spares no thoughts in being innovative. Android fanboys are proud of the freedom of personalization and tinkering around their smartphones.

We are not spoiling anything. You will need to know that the phone on the left is Android and the on the right is iPhone. Cory also owns a YouTube channel where he commonly reviews smartphones and admitted that this video began because he kept getting complaints of ‘slow Android phones’.

Cory tested Twitter, YouTube, Plato, Maps, Waze, TikTok, App Store, as well as the popular game Among Us. In all tests, the Android proved to be superior in terms of loading time, showing that Android smartphones are not necessarily laggy compared to iPhones.

However, he also points out that the Android phone is indeed new and the iPhone is simply for a reference. This TikTok video was shared on Twitter by a viewer and it also went viral.

‘Androids will forever be superior.’

Comments poured in, many with their own experience of their own device.

As an Android user, yes, these smartphones seem to be slowing down throughout the course of usage. Depending on the intensity, some may slow down a lot more compared to others. I find regularly deleting old files, caches, and updating the OS keeps the smartphone to a somewhat acceptable speed.

As also someone who used to own an iPhone, the speed comparison is very real. In long term, iPhones prove to be better with smoother transitioning that doesn’t hurt performance. However, it is also true that Apple capitalize their product so much on their brand, but lacking in innovation now. Where is Apple heading?