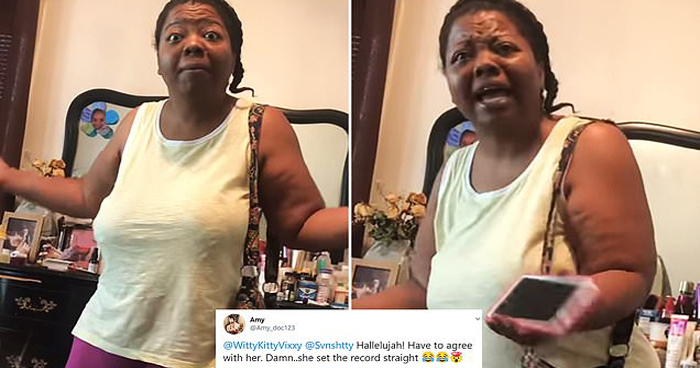 A grandmother has set the record straight on how grandparents, especially grandmothers are not automatic babysitter nor daycare teachers in a hilarious viral video.

Quayla Ann, from Dallas Texas, took to YouTube to share footage of her mother talking about why she wouldn’t be that expected-constant babysitter for her grandchildren.

Quayla Ann, from Dallas Texas, took to YouTube to share footage of her mother talking about why she wouldn’t be that constant babysitter for her grandchildren

Since shared online, internet users are applauding the grandmother for telling the truth and keeping the whole situation 100%.

Questioned by someone in the background of the video: ‘What are grandparents supposed to do?’ the grandmother was quick to start her epic rant.

She said: ‘Let me tell you all, the new generation, you all millennial, you got it all f**** up. Because I became a grandparent doesn’t automatically make me a babysitter or even a daycare.’

‘Grandparents, I mean true grandparents are supposed to raise their own children right to where they start having kids, to when they can provide and secure a daycare to able to go to work or do anything else.’

Since shared online, internet users are applauding the grandmother for telling the truth and keeping the whole situation 100%

‘True grandparents are expected to call their grandchildren to come over and visit.’

When asked if grandparents should have the responsibility of looking after their grandkids over the summer while parents are at work, the opinionated grandmother responded: ‘summer is for the daddies.’

‘Children go with their daddies for the summer as you all got split custody. See that’s how you all got it wrong. Grandparents are supposed to come to your house, stay and spend time with grandkids.’

‘It’s also expected parents drop their kids off when the grandparents call for them. Grandparents are not daycares. Everyone’s time is valuable. We all have our own life. We all worked very hard to get everybody out of the house. So why won’t you raise your own kids.’

While Some Suggests People Behind The Camera Were Rude To Laugh