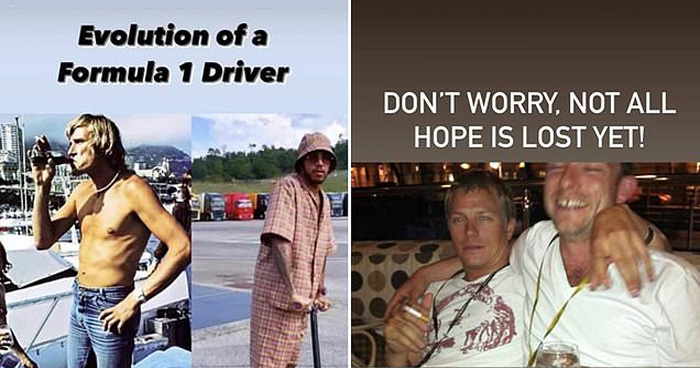 FI Star Kimi Raikkonen has always been outspoken and recently he reached a decision not to hold back on social media either. A meme of Lewis Hamilton and ex-world champion James Hunt flooded all numerous social media pages and caught the eye of the 2007 world champion. Adding a little something extra to the photo, Kimi hilariously shared a photo of himself as a response and captioned it: ‘Don’t worry, not all hope is lost yet.’

The side-by-side picture shows a shirtless James Hunt holding a cigarette between his fingers as gulp down a drink with a hand on his waist. Next to him is the 6th time World Champion Hamilton all dressed head to toe in a matching outfit, donning pink socks with bright sneakers as he poses on a scooter. ‘Evolution of a Formula 1 driver’ Raikkonen added, of which he followed up the swipe with a photo of himself appearing slightly intoxicated.

Raikkonen has never been shy about his admiration for the 1976 Formula 1 World Champion, Hunt who was a rock star in the racing world. The F1 Star has always uttered that Hunt is his inspiration, to the extent of engaging in a snowmobile race with name James Hunt in 2017.

In 2012, he equally paid the ultimate tribute at Monaco, putting on the same designed helmet Hunt wore during the 1976 season. Raikkonen is a prominent enthusiast of the Black Lives Matter movement and on a regular basis wears clothing decorated with anti-racism messages. The 40-Year-Old’s time in the racing world might, however, be reaching a close, but his fans hope he never retires.