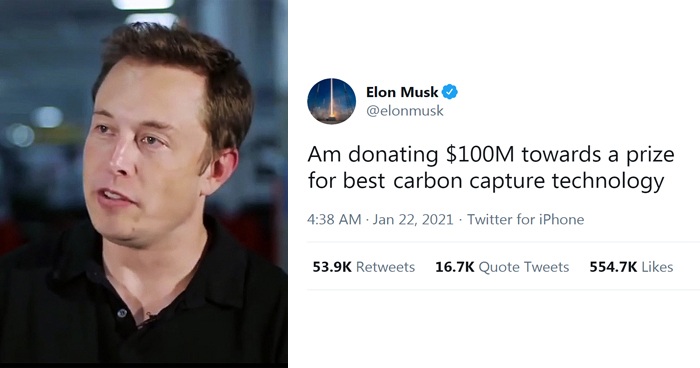 On his 1st day in office, President Joe Biden moved swiftly on climate change with a pledge to rejoin the international Paris climate accord. Inspired by the action, Tech Billionaire Elon Musk recently declared a $100 million prize to his 42.7million followers for the best carbon capture technology concept.

The capture of planet-warming emissions has been a vital part of numerous plans to keep check of climate change, but little progress has been made on the technology to date. However, Musk, who replaced Jeff Bezos as the world’s richest man, aims that a cash outflow from his financial reserves will kickstart progress in the sector, and agreeably it signals a viable solution.

Carbon capture technology has been a vital part of plans to keep check of climate change, but little progress has been made on the technology to date

With a net worth estimated at $188.5 billion, Musk, who co-owned and sold PayPal, leads some of the world’s most futuristic companies. Popularly known for his Tesla brand, Musk now owns a rocket company Space X and Neuralink. The Neuralink is a startup that develops ultra-high bandwidth brain-machine which interfaces to connect the human brain to computers.

According to Daily Mail, Musk had earlier outlined a roadmap on ditching fossil fuels and embracing renewable sources that include solar/wind energy, electric cars, and battery technology. In Australia, Musk has reportedly built a lithium-ion battery that covers 10000 square meters and siphons wind-generated electricity to power a grid for 24hrs per day for about 30000 homes.

With a net worth estimated at $188.5 billion, Musk had outlined a roadmap on ditching fossil fuels and embracing renewable sources

Nonetheless, in a bid to accelerate the development of carbon capture technology in tackling climate change, US-President Biden had named Jennifer Wilcox, an expert in carbon removal technologies, as the Principal Deputy Assistant Secretary for fossil energy.