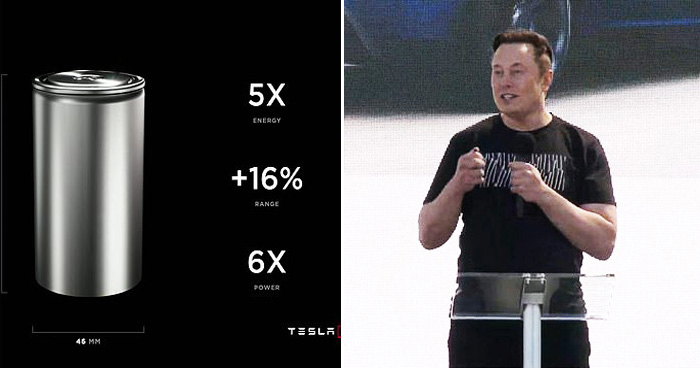 Tesla’s share value plummeted by a massive $50 billion on Tuesday despite CEO Elon Musk‘s promise to slash electric costs so radically that a $25,000 self-driving electric car will be possible.

Musk made the announcement at the firm’s ‘Battery Day’ that had shareholders live-stream the event at the comfort of their own Tesla cars.

The billionaire delved that the cell, dubbed 4680 is being produced at the firm’s pilot Fremont Gigafactory in California.

Tesla is optimistic the battery will reduce production costs and subsequently slash the sales price of its electric vehicles bringing it closer to its gasoline-powered counterparts For the design, Tesla took the existing foils of traditional batteries and created a laser pattern to form dozens of connections in the material.

Eliminating the tabs allowing for continual motion through the system, which ultimately provides six times the power and enables a 16 percent range increase to vehicles.

By reducing the distance the electron has to travel, the cell has less thermal issues and a shorter path length in a larger tabless cell, according to Musk, who explained that though the cell is bigger, it measures 80 millimeters in length, the power to weight ratio is better than a smaller cell with tabs.

‘Nobody’s done it before. So… It really took a tremendous amount of effort within Tesla engineering to figure out how do we make a fricking tabless cell and make it actually work and connect it to the top cap.’ said Musk
The new tabless battery will, however, power the upcoming Tesla electric vehicles, including the heavy-duty Semi truck, the roadster, and the futuristic Cybertruck – all of which were on display at the event.

Musk also revealed the firm’s plans to make 20 million electric vehicles a year, along with an affordable model for $25,000 that is also fully autonomous.

‘Nothing Musk discussed batteries is a done deal,’ said Roth Capital Partners analyst Craig Irwin. ‘There was nothing tangible.’

Investors had expected two significant announcements at Musk’s oft-touted ‘Battery Day’: The development of a ‘million-mile’ battery with a 10 years or more working span and a specific cost reduction target – expressed in dollars per kilowatt-hour – that would finally drop the price of an electric vehicle below that of a gasoline car.

Musk offered neither. Instead, he promised over the next several years to slash battery costs in half with new technology and processes and deliver an ‘affordable’ electric car.

Musk acknowledged that Tesla does not have its ambitious new vehicle and battery designs and manufacturing processes fully complete. Tesla has frequently missed production targets set by Musk.

Building an affordable electric car ‘has always been our dream from the beginning of the company,’ Musk told an online audience of more than 270,000.

Tesla on Tuesday also introduced a new Model S Plaid, a 520-mile range sedan that could reach top speeds of up to 200 miles per hour (320 km per hour), with deliveries starting in 2021. The Plaid was listed on Tesla’s website on Tuesday at a price of nearly $140,000.

Musk’s ‘Cybertruck’, which looks like an armored vehicle with a futuristic angular body in gunmetal grey, will go into production in 2021.

Tesla’s pickup, which Musk said will cost $39,900, will have an estimated battery range of up to 500 miles. Tesla boasts that the car will have a nearly impenetrable monochrome exoskeleton providing passengers maximum protection, together with ultra-strong glass that absorbs and redirects impact forces.

The $200,000 Roadster sports car – an updated version of Tesla’s first production vehicle from 2008 – can travel 620 miles on a single charge, a new record for an electric vehicle.

Its maximum speed is over 250 mph, this would make it virtually the fastest car in general production.

The car is also fitted with It Tesla’s semi-autonomous driving system, designed to keep a vehicle in its lane without drifting, and can transition from one freeway to another with no human intervention.

Musk said in a tweet that the battery improvements to be unveiled will not be in high-volume production until 2022.