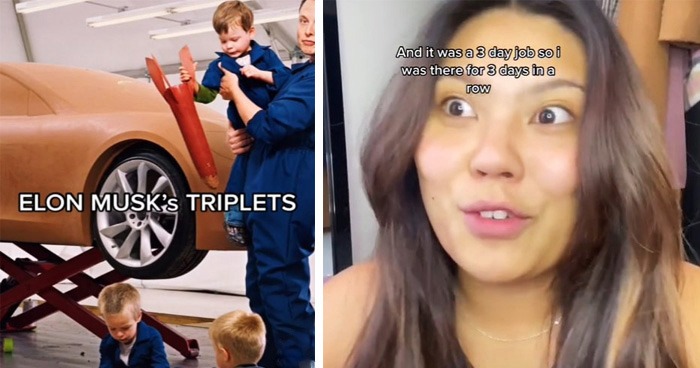 Woman Who Babysat Elon Musk’s Children Shares What They’re Like, And It Goes Viral

Ai Yamato worked as a babysitter for a family for 3 days. She thought it would be a normal part-time job turned out to be a once-in-a-lifetime experience for her. Yamato was babysitting for the kids who were having friends sleeping over there.

She shares her story on TikTok and surprised people when at the end, she revealed she had met the three kids of Elon Musk!

It began like any other babysitting day for her. Yamato was working for a family with two daughters.

Later that day, she was informed that the kids are having friends coming over. They were triplets and it sounded like it was going to be a fun day for the kids!

They’re healthy kids who love to game as well as enjoy healthy dinner.

Yamato described that the day went very well, and they were, in fact, well-behaved kids. After a day of hanging out, playing at the pool, and video games, Yamato pointed out how health-conscious they are. They asked for dinner at Whole Foods instead of the usual junk food kids ask for!

After dinner together, she was still oblivious to the identity of the three kids.

Elon Musk has six kids where one of them made headlines after Elon gave the eight-month-old baby a unique name, ‘X Æ A-Xii.’ Aside from him, he had two other sets of twins with ex-wife Justine. Three of them were a set of twins who are now 15-year-olds. They are Kai, Saxon, and Damian, the kids that Yamato was talking about.

She was shocked later when she found out that the triplets were actually Elon Musk’s kids!

She now dubs herself as the celebrity babysitter because the triplets were not her only celebrity kids encounter.

Later that week, the house gets a call that the girls’ cousin was coming over. He was about 9 or 10 years old.

“I was just having a casual conversation with the dad, and he was like, ‘Oh yeah, that’s the kid’s cousin,” Yamato said. But the question that the dad threw to her took her off guard. He asked her if she knew Charlie Sheen, to which she answered yes.

“And he goes, ‘Oh yeah, that’s his son,” she spoke as her expression looked confused and shocked.

It was one hell of a week for Yamato the babysitter.

And if that’s not one of the most memorable babysitting experience ever, I wouldn’t know what is. Yamato also added that she could never walk into Whole Foods the same again because she’s reminded of all this. I mean, who could after all that?