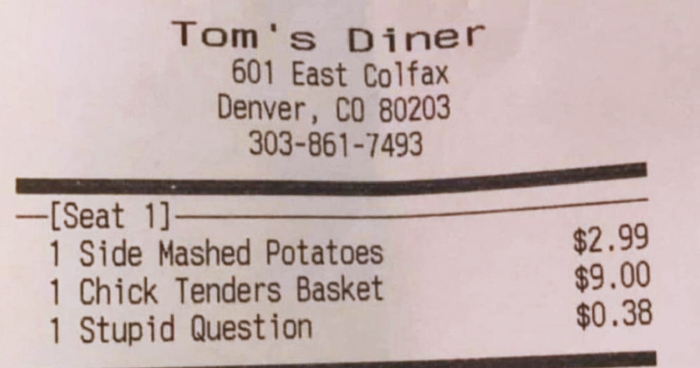 There’s a diner in Colorado that has on the menu many things other than your typical food and beverages. Tom’s Diner in Denver actually charges people ‘Stupid Question’ for $.38 and it’s hilarious.

Believe it or not, it’s one of their most popular menus.

As the post got popular on Reddit, a lot of people were wondering if this place was real. Some were asking what qualifies as a ‘Stupid Question’ and what would they recommend to go with it.

The receipt is very real with other people confirming they’ve paid 38 cents to prove just that.

It’s also listed on the menu which shows they also serve normal things like french fries and coleslaw.

Along with some ‘Healthy Options’ such as ‘skip your next meal’ and ‘walk home’ for the wonderful cost of ‘priceless.’

And it’s not at all meant to extort their customers – the restaurant is actually very popular locally with the cheeky things they do. Even their wall decoration is funny! TODAY shares that the restaurant has a history of 20 years and the general manager Hunter Landry shares how it all began.

The funny add-ons were added 20 years ago for fun. Landry said, “It’s meant to be playful. It’s good to keep things light in today’s world.”

“The majority of people really get where we’re coming from and understand it’s meant to be playful.”

“Over the years, maybe a few people have been perturbed but the response is generally positive,” he added. And the proof was from the stock of funny questions he’s heard. For example, “Are there any dues for the turkey club sandwich?”

“Does the ice have any water in it?”

It’s all in fun spirit, as the manager asked his staff to not actually charge customers who ask really stupid questions seriously. Because this is what he said, “It’s all about not taking yourself too seriously, We’re not here for a long time, so let’s enjoy ourselves and try to make the most of this life.”