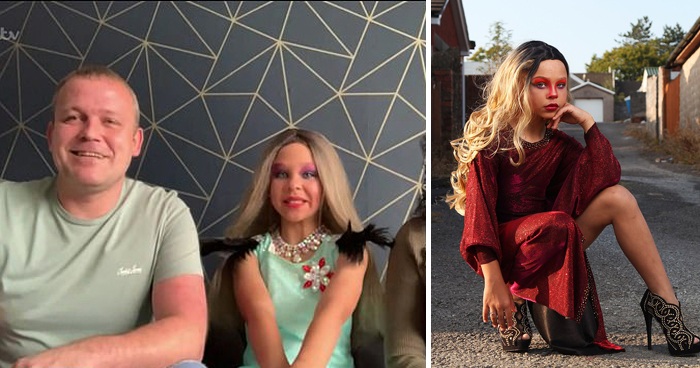 Drag performance has gradually become a powerful form of art. It became increasingly accepted, a big thanks to the activism of people in the LGBTQ community. Presently celebrated in the mainstream media, a drag queen is defined as a man who dresses up as a woman in order to perform and expectedly which parent would be proud of their children doing this?

The father of Britain’s Youngest Drag Queen like any father would react had struggled to accept his son’s heart desire but recently was left thrilled after seeing him performing in front of thousands of people. Seeing that his son had inspired people to come out, the dad couldn’t curtail his happiness.

11-Year-Old Fabian Butler from South Wales since age seven started putting on his mother’s outfits. Becoming the youngest drag queen, Fabin specifically performs under the name ‘Francheska Valley’ to 7000 guests at DragCon.  Speaking on This Morning, Dad Darren explained that having grown up in the ’80s and ’90s, it’s painful that his son didn’t fulfill his expectations.

But after seeing him perform, Darren admitted he was thrilled at how much he motivated others. ‘I was born in the 70s and raised between the 80s and 90s. It was honestly frowned upon, so on finding out I felt it was just a phase that will fizzle out.

But it actually got longer and longer and it became painful. As a dad when you have a boy your expectations are to the men stuff, but Fabin turned out to be a natural performer. It was hard to accept but I now truly support him.’ Fabin explained.

Internet users praised the parents, dubbing them ‘incredible and ‘understanding.’ A user wrote: ‘She looks very beautiful. So lucky to have these parents! Truly amazing! A second added: ‘I am fully obsessed with this young drag queen and his accepting parents.’ Also speaking, Fabian’s mom identified as Rachel, however, confessed that his son’s ambition isn’t a surprise to her having observed her make-up kits always going missing.