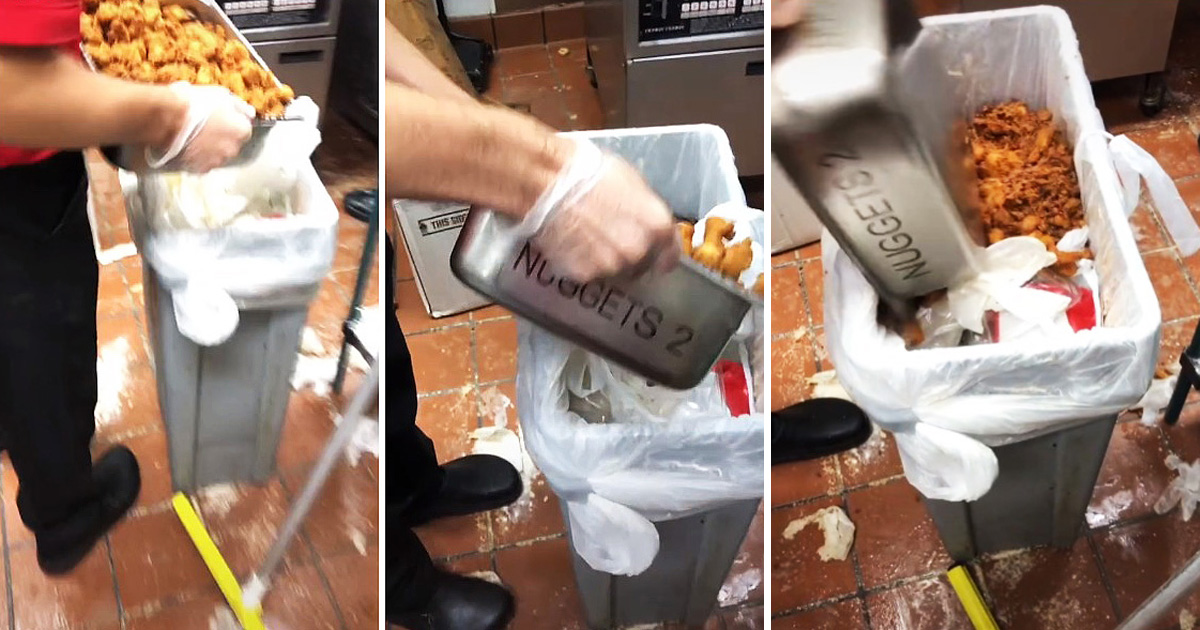 The internet is infuriated! A TikToker with the username @jlucvss recently shared a clip of a Chick-Fil-A Employee throwing an entire tray of chicken nuggets in the trash at the end of a shift. The anonymous employee shared the behind-the-scenes of the nightly cleanup, and it featured dumping leftover chicken in a garbage bin while music blasted in the background.

@jlucvss shared a clip of a Chick-fil-A employee throwing out a tray of chicken nuggets at the end of a shift.

“What they do every night with the chicken nuggets at Chick-Fill-A.” The TikToker wrote while calling out the Georgia-based chicken food chain for being uneconomical. Instantly, the clip went viral, garnering over 8million views and thousands of comments. Other TikTokers, without hesitation, were left unimpressed to see the nuggets being thrown out.

The clip shows the employee dumping the leftover chicken nuggets in a plastic garbage bin.

A TikToker thought employees were allowed to take leftovers home, but @jlucvss replied, saying they can only grab what has been boxed already. “The amount of food we throw away and the amount of starving people there are just doesn’t sit right with one.” One user wrote. Another asked: “Why not give it to the homeless.” While a third, an employee attested: “Can confirm. We used to throw out So much chicken.”

The incident has sparked outraged comments. Some people urged the chicken should be given to the homeless instead.

A few TikToker pointed out it isn’t a black and white situation, stressing that Chick-Fil-A will be liable if the food was given away and someone becomes ill. However, going by the company’s website, Chick-Fil-A already has a food donation program called Chick-Fil-A Shared Table, launched in 2012. The program aims at “fighting hunger in their local communities by donating surplus food to local soup kitchens, nonprofits, shelters to feed those in need.”

However, Chick-Fil-A already has a food donation program called Chick-Fil-A Shared Table. It aims at “fighting hunger in their local communities.“

Here’s How People Reacted To The Incident: