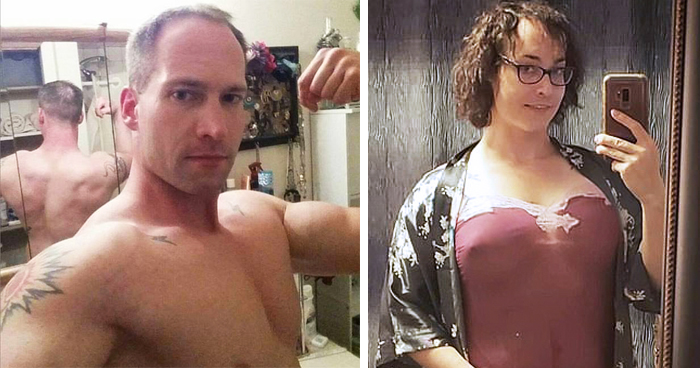 A former bodybuilder, who hid behind a jacked bro persona, an alpha male figure for 30years has officially accepted her true identity by transitioning from male to female.

Allie Rose Keeler, 36, from Montana, had right from time knew she was different but was terrified to reveal her true gender identity to her socially conservative parents.

Allie Rose Keeler, 36, from Montana who hid behind a jacked bro persona, an alpha male figure for 30years has officially accepted her true identity by transitioning from male to female

Instead, the 36-year-old heightened her masculinity, becoming a personal trainer and building up a fit, muscle body — before she eventually accepted her true self and spent $110,000 on gender reassignment surgery.

Allie knew she was uniquely different as early as 4-Year-old, but realized she was Trans at age 14. In an essay she wrote for Medium in 2018, Allie revealed she grew up in a conservative state, surrounded by people who would prefer she doesn’t exist.

But she felt the need to mask who she was inside, so she went the extra mile to look as masculine as possible, hit the gym to build up broad and muscular muscles. Allie even became a personal trainer and would take shots of testosterone.

‘For the past 20years, I had tried my best to shove my feelings regarding my gender identity as far down as I could. Since my teens, I have been grappling with it and as I reached my 30’s, the only thing I could do was try to ‘ man up ‘ as best I could, to the point that even those closest to me were privy to see through the cracks in the metaphorical armor I had created.’ Allie wrote on Instagram.

Allie, however, began seeing a gender identity therapist in April 2017, began hormone therapy and has undergone three surgeries, including 15 hair removal sessions, estimated at $110,000. Allie is still a personal trainer, and confidently still takes pride in her muscles – more at peace with who she is now.