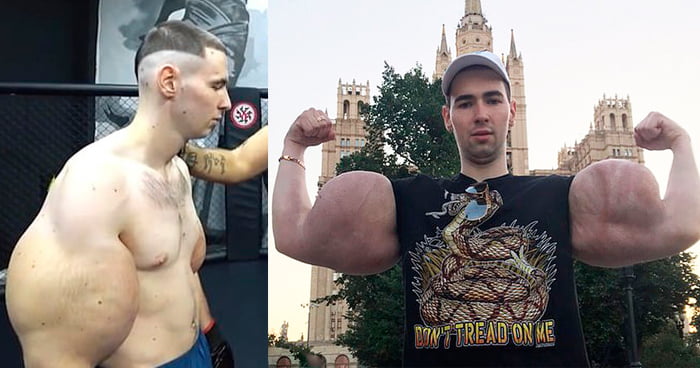 Kirill Tereshin, 23, threw in the towel on his first MMA debut and that was after his enlarged his arms with dangerous chemical injections. His first MMA debut did not last more than 3 minutes as he stoon in front of Oleg Mongol, 43-year-old fighter.

This ‘Popeye’ is also called ‘Bazooka Arms’ and is a wannabe bodybuilder.

As the two fight in the ring of the city of Abakan, the crazy fight quickly showed the different in power. 20-year of experience differences showed how difference the game is compared to Russian MMA rules.

Tereshin previously lost to Russian champion Vasiliy ‘The Dumping’ Kamotskiy in May.

His biceps did not come from training, but injections of litres of synthol. It raised 10 inches, but the side effect has been warned by Russian medics. They can lead to embolisms in the lungs, strokes, cysts and ulcers. And as much as it baffled us, this young man went through it.

Tereshin was engaged to model Olesya Malibu. Reports say the two have broken up.

He lost two fights, injected chemically dangerous substance that will most probably lead to terminal illness and may also have lost his love. Kirishin himself said, “I do not know what to do. All that is left to me is to rely on God. I will lie on my bed and pray to God.”