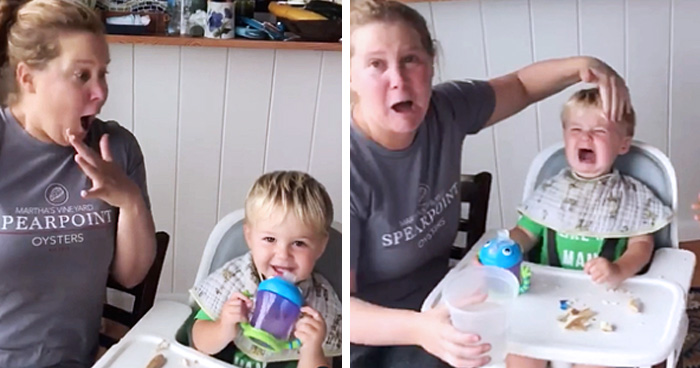 One great achievement for a lot of parents is their child’s first words and if your child resides in a mixed-gendered based home, the fight between the baby uttering Mom or Dad first lingers. It’s usually a stiff competition, but a lot of kids ultimately say the word ‘Dad’ first, and the viewpoint has always been that it’s an easier sound to pronounce.

So just like most parents would be, Amy Schumer, 39, was left stunned or perhaps delighted to have filmed her sixteen-month-old son’s milestone on camera. Her son’s first word was ‘Dad’, which of course caused Schumer to break out into happy tears, but unfortunately, the reaction had a different impact on her son – he morphed from a smile into terrified tears.

Amy and her husband, Chris Fisher welcomed their son named Gene in May 2019 and since then the mom has remained open about her motherhood journey.

Just recently, her now-viral was shared to Instagram, featuring the adorable moment Gene said the word ‘Dad’ for the first time ever. ‘This clip is a shock to us. Having to experience these first moments with my son makes me feel so lucky.’ Amy captioned the footage.

As seen in the clip, Amy can be spotted sitting beside Gene, who was finishing a meal in his high chair. The mom-of-one then went on to express how they both miss daddy, referencing husband Chris Fisher before turning to Gene and asked: ‘Can you say, Dad?’

There was clearly a dramatic pause, but then Gene looked into the camera and said the requested word and judging by Amy’s reaction, the moment is pretty unexpected. Nevertheless, it seems Gene had gotten the word ‘mom’, following a sweet clip of Amy coaching Gene to say the word in September 2020.

Gene interestingly did repeat the word back and then Amy covered his faces with kisses. On the other hand, Amy has been nothing short of candid about navigating through her career and motherhood.