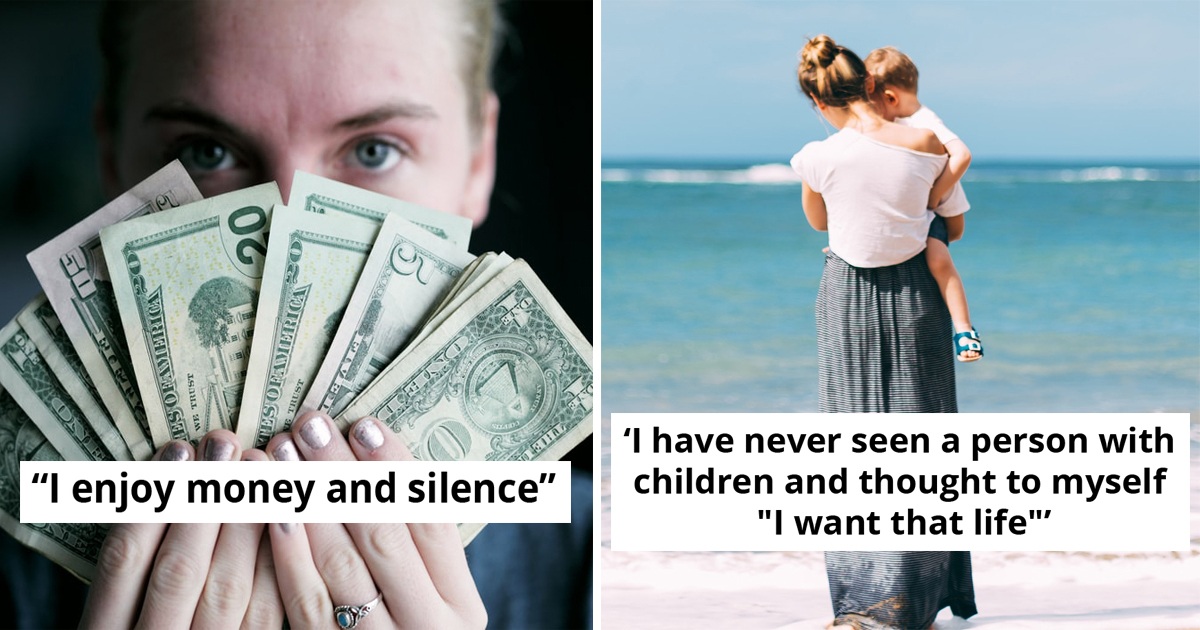 Becoming a parent is a huge responsibility. You can choose to raise a fantastic human being or a broken adult with horrible childhood. Parents play the most significant role in a child’s upbringing before they become adults. But before that, parents could always seriously think about their decision to have a child.

These people share the reasons why they don’t want children on Reddit. Some people do have conditions that don’t allow them to have one, but these people share their personal reasons why. Essentially, the fact that all of them united under the ‘won’t have one if can’t love one’ notion is just proof that they’re selfless enough to avoid harming a child’s future from the result of temporary lust.

“I’m aromantic and self-centered. I would make a terrible partner and a lousy parent.” – TakerFoxx

“I’m too mentally unstable to provide a quality life for any potential kids.” – guutarajouzu

“This world is stupid, corrupt, full of as**oles. Why would I want to bring anyone into this mess?” – Western-Monk-8551

“I love peace and quiet.” – smooshf**kie

“Our society is structured so that nearly everyone but the wealthy is living hand to mouth. I feel no security in my life and find life stressful. I can’t imagine how bad that would be if I had to worry about another soul.” – Harvey1977

“To sum it up:
– I like having my time and money to myself. Fancy sitting in bed late, drinking beer, and ordering takeout? I can do that. Going out with friends at the drop of a hat with no worries? That too.
– My mental & physical health. Some issues are genetic in my family and I’d never wish that upon a child.
– This frankly isn’t a world that I’d like to bring anybody into.
– I’m frankly quite selfish (I’d never, ever neglect a child, however). I’d prefer the new clothes and games that I bought recently to a nappy / diaper bill.

I’ve just become an uncle so I totally understand how people can want a child, it’s just not for me personally.” – Brainwrongs_

“1. Mental health – I have extreme anxiety and ADHD. I don’t want to have a kid and potentially put them through what I go through.
2. They’re expensive.
3. Pregnancy is terrifying to me. Never want to try it.
4. Spite. Got tired real quick always being told I’d be a great mother, even when I announced that I don’t like kids and never want any.” – Vinekyrie

“Since I am the oldest, I call my experience “the free trial” and to make things short, I don’t like it.” – EmergencyUnhappy7454

“Bro, I can barely handle a full-time job and taking care of a cat. I do not have the time, money, patience, or desire to raise a kid. I want to live my life, not be weighed down with a responsibility I don’t want and wouldn’t be beneficial for me. I like having the freedom to not have to deal with all that.” – TheSorge

“Your vagina getting ripped during childbirth, 9 months in hell (pregnancy) but then childbirth and pregnancy aren’t even the hardest parts of parenthood. Staying up at night, getting little to no rest, changing smelly diapers, post-partum depression, physical and mental exhaustion, the financial strain of having a child, the unavoidable health damages of pregnancy. The list goes on… seriously, what is there to like?!” – grim_bonecollector

“You need a good reason to have a child. You don’t need one to not have one, just as you don’t need a reason not to have a f**king giraffe.” – BobAteMyShoes

“1. Kids are expensive
2. I rather spend money on travel than on children
3. I want to retire early
4. I only like children in small doses
5. I rather do drugs at Burning Man than raise a child. I don’t want to be that guy who tries to do both.
6. There is no decent return policy on kids.
7. I really like my me-time.
8. Every time I see people with kids, I have an overwhelming feeling of dread.

I find people who have kids a little boring, to be honest. Not always, but I know that their rockstar days are now behind them. I mean, I’m happy for people who want to have kids. I’ve also had friends confide in me that they wish they hadn’t have had kids. This should be a “f**k yes, or no” decision.” – No-Psychology1751

“I’d rather live my life without being weighed down by a huge financial burden. Plus most kids I know are little s**ts.” – ThatOneBuilderGuy

“I simply refuse to put a child into this world as it is,
I know too much about how ugly it truly is.” – Massive-Ad7628

“I was born this way. Have just never desired children. No particular reason.” – tennesseewaltz

“Too mentally ill from childhood trauma and have various autoimmune diseases. Wouldn’t be fair to have a child when I’m not completely present for them. Love kids but not for me.” – sheakat1997

“I understand the immense responsibility & sacrifice they are and choose instead to work on myself and continue to nurture my own experiences and growth through the one life I have.” – _soch

“As the eldest sibling in my family, I’ve already lived out my maternal dreams. Mental and chronic illness runs in my family and I can’t risk passing it along. I don’t want to put my body through pregnancy.

It’s a lot of responsibility and I rather live for myself and all the other things I rather do in the world.” – overthinkingdreamerx

“…I can barely take care of a cat. How do you think I would do with a child?” – TipsyNate

All my free time I had is gone. I don’t really care about the money. He can have it all and all my crap I collect too. He can have it. I just want my time back. Or some time. Any time. I can’t remember the last time I’ve a whole movie from beginning to end. I can’t remember the last time I’ve just laid around listening to music. And when I do get time away from him, I catch up on stuff that hasn’t gotten done, and I really don’t enjoy the time. There’s no such thing as me-time anymore.

“I enjoy money and silence.” – StinkFingerPete

“I love my life too much. I hate mess and noise. I love traveling whenever I like. I love going on trips and meals out with my husband. I love being able to do what I want whenever I want. I don’t want to spend my days listening to crying, arguing, whining, doing the school run in the rain, and shopping for food. The planet has plenty of humans and we have done a great job of wrecking the planet and treat animal so cruelly – I don’t want to add to that problem.” – CurvePuzzleheaded361

“I don’t want kids. There’s literally no other reason.” – KirinG

“Imo, I should justify why I want kids instead of finding reasons why I don’t want them. In my case, I don’t have a reason to want them.” – Grapezard

“I have never seen a person with children and thought to myself ‘I want that life.'” – kn8ife

“I am selfish so I am not gonna sacrifice my time for them. I don’t want to bring kids into this world if they can’t be unconditionally loved.” – the1992munchkin

“I don’t want to go through birth; I don’t like the baby stage. Children and toddlers are fun and can be adorable but not 24/7. I like money and the peace of mind that I won’t do anything to screw up their lives; everyone I have said I don’t want kids to will say I told you so. And finally, I’m not responsible or mature enough.” – Ghostofmeow