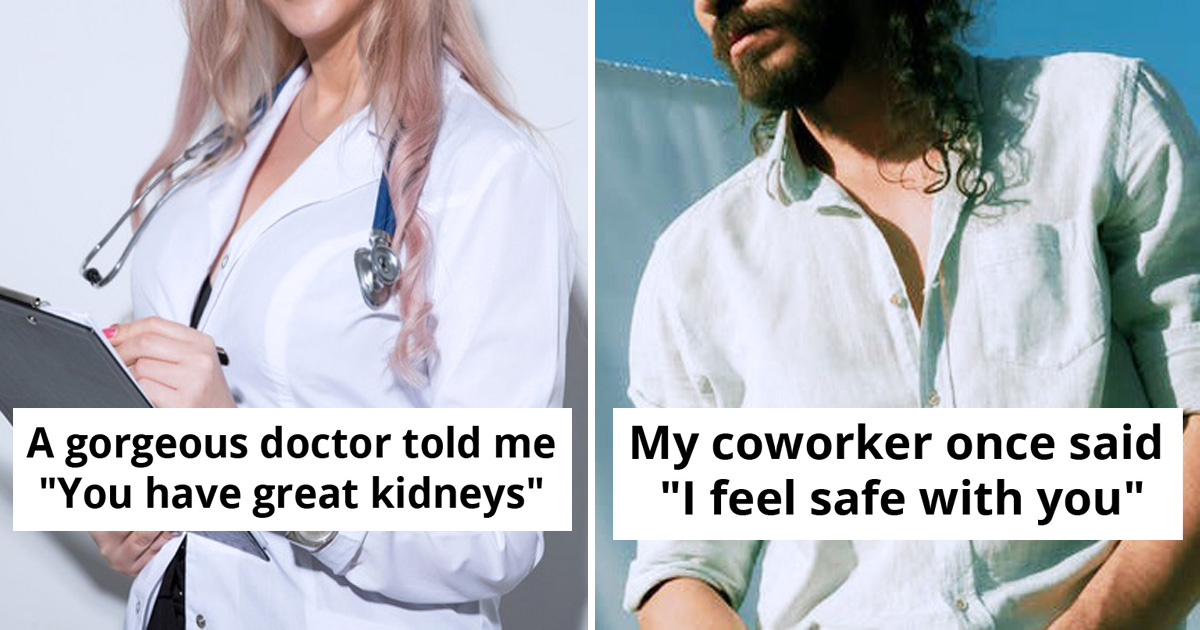 Men do not deal with feelings as well as women do. It’s easy to see why – society and the environment like praising men who do not show their emotions. On the other hand, men who show them are considered unmanly or even ‘feminine.’ Toxic masculinity hurts men, too.

Someone asked men on Reddit, “What’s the best compliment you have ever received from a girl?” Heartwarming stories from men flooded in, and we know you’ll only feel fluff and happiness from reading these.

“My girlfriend’s grandmother has Alzheimer’s, so she doesn’t remember meeting me. Every time we go and see her, she’ll take my girlfriend to the side and ask, “Who is that handsome young man?” while pointing to me.” – BobBoib

“‘You’re really funny, I like you.’ Some really cute girl said this to me quite a while ago, had me nearly crying since I don’t get complimented at all, I don’t even compliment myself. Cried for 10 minutes when I got back home.” – Sent1nelTheLord

“I had the same experience with a sweatshirt. Got a Redhead sweatshirt (brand, not red-haired person), cutest girl in the class complimented me on it, still have that sweatshirt.” – Gwall2020

“During Halloween, I took off my mask and some girl said. “Damn you should keep that mask off more often.” – FrequencyXII

“Walked by a young lady walking into a restaurant. She stopped & came back in to tell me I smell great. I smiled the rest of the day” – HairlineGod

“I (M) was working in Taiwan one summer. A solid group of people. Anyway, when the time came to part ways, lots of hugs were exchanged. There was a traditional Muslim woman in the group who I clicked so well with from the moment we met.

My understanding is that traditional Muslim women do not make physical contact with males other than their husbands. Anyway, I got to her for goodbye; I simply put my hand in a waving gesture and said my goodbye. She then said, “No, you know what? I’ll hug you.” And we hugged. I think about this from time to time.” – cloudlocke_OG

“One time a buddy of mine was making fun of my hat and a random hot chick said, “No! It looks super good on you.” I wore that hat almost every day after for 3 years until it wore out.” – Vict0r117

“A girl said I was understanding.” – ImACoolGuy69

“For a short period in my early twenties, I used to work at this school. At one point when we were sitting down eating lunch, this tiny first-grader comes and sits next to me, and says quietly:

“I wish I had an older sister”
“Oh? Why?”
“Cause then you and her could become really good friends, and then you would come visit us all the time.”

I’ve gotten quite a few compliments from my own age group and older, but that little innocent one was almost heartbreakingly sweet and nice to hear.” – Hitno

“A woman in the lobby of a medical center with a baby in a pram asked me to keep an eye on it for a moment. I said ‘are you sure about that’ and she said I just looked like someone she could trust. I was touched, and she was right.” – TakenIsUsernameThis

“Someone once told me that I was their happy place. I treasure that to this day.” – sux4u

“I got onto an elevator at the last minute one time and an older lady said it reminded her of Indiana Jones, then she said I could do radio with a voice like mine.” – AcidaEspada

“I had a girl tell me she was impressed with how I stayed calm in a stressful situation.” – Reddit

“Her: You could lose all your hair and gain weight. I would still think you are amazing. I was like: “Wow.” – Singleslicestudio

“Your freckles are so cute!” Was said to me by a drop-dead gorgeous coworker of mine. Left me feeling like I was on cloud nine.” – portablecabbage

“21 years old at the orthodontists getting a retainer fixed. Nurse who was probably only a few years older than me told me I had really nice blue eyes, while her fingers are all in my mouth. I’m gonna hold onto that one for awhile.” – jibafij

“Last week, a very good client told me she likes working with me because I have joy in my demeanor.” – Desert_Beach

“As a child, after a suicide attempt, a nurse once told me that superman doesn’t exist. The reality is that most people don’t care about me. I have to take care of myself because no one else will. I have to be my own hero, and I have the strength to do that. It was tough love, but it saved my life.” – Reddit

“During the divorce process, my ex-wife said of me and our now-grown daughter, “You are her home.” For all the years of cold indifference and soul-crushing disapproval, it was unspeakably nice to see that email.” – stupidlyugly

“I was told, by a rather drunk lady, that my voice makes her ovaries twitch. I’m used to having people tell me I should be on radio, but that one was unique.” – nethobo

“Shortly after I graduated from college, I got this e-mail from my best friend’s girlfriend. Not having much of a life, I was a frequent third wheel on their dates. She was a year behind us, so she was still in college after I had finished.

Anyway, she just goes on and on in this e-mail about how much she misses seeing me around campus and hanging out with me. The line that stuck with me was, “Of all the people I know, you’re the one I most want to see happy.” Closest thing I ever got to a love letter.” – originalchaosinabox

“A girl once told me I saved her life because (unknown to me) she was battling depression when I happened to show up with her favorite Starbucks drink to congratulate her on her new job. You never know the impact your small deeds can do.” – TheRavingRaccoon

“I had just started wearing cologne for the first time in my life (around 22) and looked up how to actually apply it properly as not to be obnoxious. Weekend comes around, I get dressed, throw some cologne on, and go out to get a coffee and run errands. Get to the Starbucks and order and the barista says, “I like your cologne, it smells nice and you have the exact right amount on when most guys WAY overdo it (paraphrase).” I was so caught off guard by such a sincere and innocent compliment I still think of it before even generic GF compliments.” – LoneRanger4412

“‘The kids are really lucky that you’re their dad.’ I was wondering if I’d been doing well as a dad and felt kind of depressed, but hearing that from my sweet wife reaffirmed that I’m doing okay.” – jeff_the_nurse

“Early on in our relationship my now wife told me that she usually didn’t sleep well, except when I was there, and then she fell asleep easily. Which is especially impressive at the time given we were cramming me (6’3″) and her (5’11”) into a standard twin bed.” – coteyar

“My really sweet young teenage niece told her mom (my sister) that I was the kind of guy she wanted to marry one day. All very innocent and it melted me.” – GhostWriter888

“A coworker who I would walk to the bus station with said “I feel safe with you” and as a big hairy dude with a resting murder face and a deep voice, that was something absolutely new to me. It’s been 6 years and I still think about that compliment.” – mejejix

“Delivered for hospice for a few years. I kept having deliveries to this one facility where there was an old woman in a wheelchair who kept saying, “Hey, pretty man,” whenever I’d walk past. I’d say hi back but I didn’t think much of it. She probably said that to everyone.

But then one time a female orderly asked her, “Pretty man?” as I was walking away. “GORGEOUS man,” said the old lady. Never had that word associated with my appearance before or since. Thanks, lady.” – i_amtheice