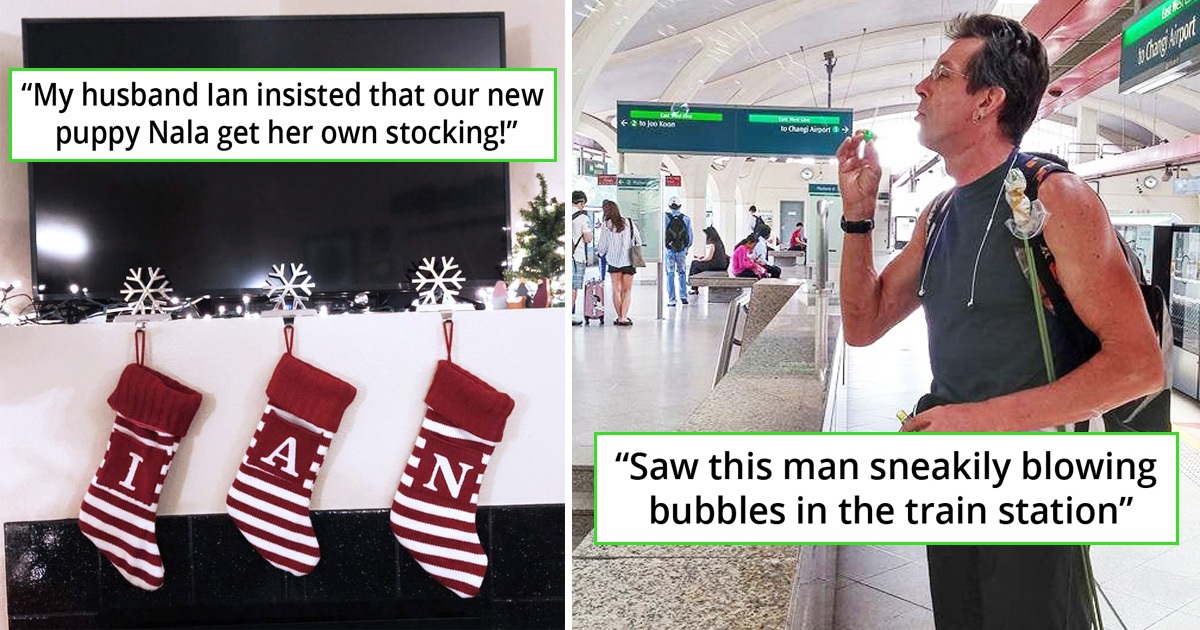 Man-child, we’ve heard that term a lot. Men may label themselves as dare-seeker, creative people, etc. But it’s never wrong to also call them the kids who never grew out of their imagination and excitement. They love playing on the fact that no one suspects it when they blow bubbles and secretly enjoy watching new Pixar movies with kids.

They never grow up and we’re actually just jealous of the fact.

SpaceX zero G indicator is the most scientific equipment I’ve ever seen.

My husband Ian insisted that our new puppy Nala get her own stocking.

“Boyfriend taking care of my cat for me. I asked how it was going and he sent me this.”

I was called as man-child by my ex.

When you actually marry a man-child (and not allowed in!).

Wife was throwing a tantrum, so husband out-tantrum her.

It was boring at work on Friday.

Saw this man and when we made eye contact, he said, “No one suspects the adults.”

Boyfriend got his order of 500 googly eyes and this is the first thing he did.

This is my grandpa, 90, on his battlstation. He’s also the one who first introduced me to PC, iPad and Tesla.

Dad thought he was home alone, came to see why he was laughing.

Me and friend was on a house-sitting job. When asked if we’re having fun by owner, here’s our answer:

My Amazon seller of a boyfriend staged this as I got home.

Boyfriend wandered off on a 12-hour delay, found him with other 5-year-olds on Pixar marathon.

Printed and attached this to wife’s air freshener, spitting acid every 30 minutes.

Wife called me immature, but… what do you think?

Caught him red-handed, thought he was exercising.

Friend trying to get his cat to catch bugs.

We did our duty, let no man tell us otherwise.

His head got stuck when he tried feeding a dead bee to the spiders in the bushes.

This is our Home Depot edition.

Husband likes scaring me by placing this everywhere.

Not letting husband to the craft store alone with the baby anymore.