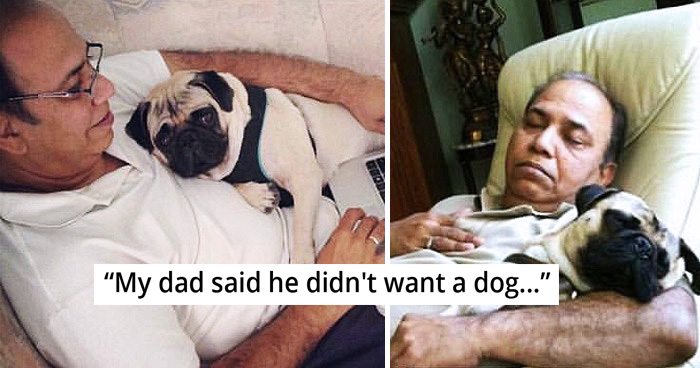 When you really, really want to bring a pet home, the biggest hurdle is often your own parents. Yeah, your dad has been so adamant about not letting you get a pet, and eventually, when a yes barely escaped their breath, they made it clear they don’t want anything with it.

Some people expected their dads to fume in rage or just be in disgust at the sight of the dog. But what happens is a true betrayal – you feed and care for the dog, but the cuddle with your dad all day long. Like, really dad? You don’t want any furry friend at home nor anything to do with them while you literally can’t separate from them anymore?

But, as long as everyone’s happy, then it’s not really a bad thing!

Dad said she’s not allowed on the couch. Technically, she’s not.

Dad said he didn’t want any iPad nor a dog.

Dad never admit that he loved our old dog, and he didn’t really have to with this pic.

Walking into the room seeing the same dad who said he doesn’t like dogs.

Same man who claims to be not a dog person.

Dad was against me with getting a dog, but seems like he changed his mind.

It’s been 3 years since my dad was against getting another pup. Here’s our new rescue, Grace.

Dad said he didn’t want to have anything to do with the dog.

Dad didn’t want a dog nor a second dog. Ok.

Dad was not excited about the puppy, but the puppy fell in love with him.

Dad said he doesn’t want a small dog. Just finished giving him a bath himself.

Dad said he ‘don’t want a damn ankle biter’ and it’ll only be my dog. Ok.

We put down our puppy of 14 years, hesitant about getting another puppy. Well, looks like that’s what he needed.

He said no dog in the house. Now they’re inseparable.

Claims to be not a dog person.

He did not want us to get a dog initially, but we found a picture in his room.

Dad was sure he didn’t want any dog.

Dad did not agree about getting a dog 15 years ago, but now they’re best friends.

Dad did not like the idea of me getting a dog, but he now rubs his back until he falls asleep.

I find my dad and the dog he said he didn’t want like this really often.

Dad did not want the damn dog. Yup.

Dad was the one in the family against getting another dog.

Dad acted like he hates how the dogs smell, but mom sent me a picture of him like this.

Dad was always making a big deal about hating dogs, but… yeah, ok.

Dad was against getting a dog after we moved because they can be messy and destroy things. Now a dog is my dad’s best friend.

This is my dad who didn’t want a dog.

27 People Shared The Most Strange Stories Of ‘Butterfly Effect’ December 4, 2020