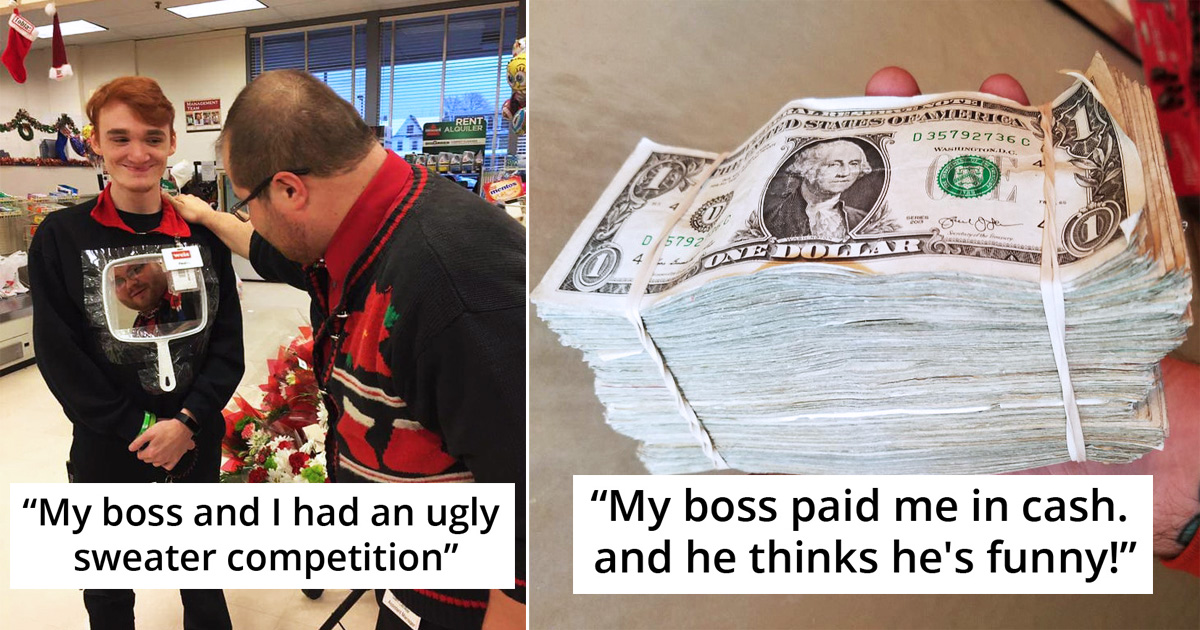 29 Examples That Show Hilarious Side Of Boss-Employee Relationship

One of the biggest factors that affect an employee’s performance is the workplace environment. Direct superior plays a big part in making sure this environment supports its workers to do their best. It has been to one with healthy competition, but on top of that, one with a boss who actually cares about you as a human being.

You can really tell when a boss is someone you want to work with for the rest of your life. You can also tell when your employee is secretly thinking you’re not treating them well.

We love doing pranks and jokes for our boss on his birthday, and this year, we Photoshopped employees’ faces on his kid.

Had an ugly sweater competition with the boss.

Boss complained about a co-worker’s long hair, and she found the solution.

Boss told me about leaving notes when I’m away from the desk, so I invented this.

In a contest with the boss for weight loss. It’s my birthday today, and he brought me this.

According to her, for my boss’s 50th birthday (or 49a), the team decided to be supportive.

Left this footage for the boss in the morning.

Boss did not like how he looked in this group picture and asked me to Photoshop it. With my limited skills…

Friend faked his doctor’s note and got a response from the boss.

Boss made me arrange the meeting room on my day off. I did.

My welder friend sent his boss this present.

Boss has been doting on daughter so much, but I wasn’t about to let the attention be on her artwork in the office.

Boss paid me in cash for working in construction.

Get a grip Cody.

I housesat for my boss and watch his dog for a month. I framed these pictures I took there around the house and he didn’t notice them for a week.

Boss won’t be here until the 14th, so I and co-workers improvised.

Boss told me to find a way of keeping the mice out of the cable tray.

Boss installed an IP camera in the store to spy on us, so I retaliated.

Complained to my boss and received a from minutes later.

The manager posted his vacation announcement and reminder.

Boss just gifted himself a classical oil painting… of himself.

Boss sent me a notification.

Boss walked up to me, deadpan, and slapped this note on me.

Boss gave a key to this drawer and laughed hysterically as I tried to unlock it. Did not realize it then.