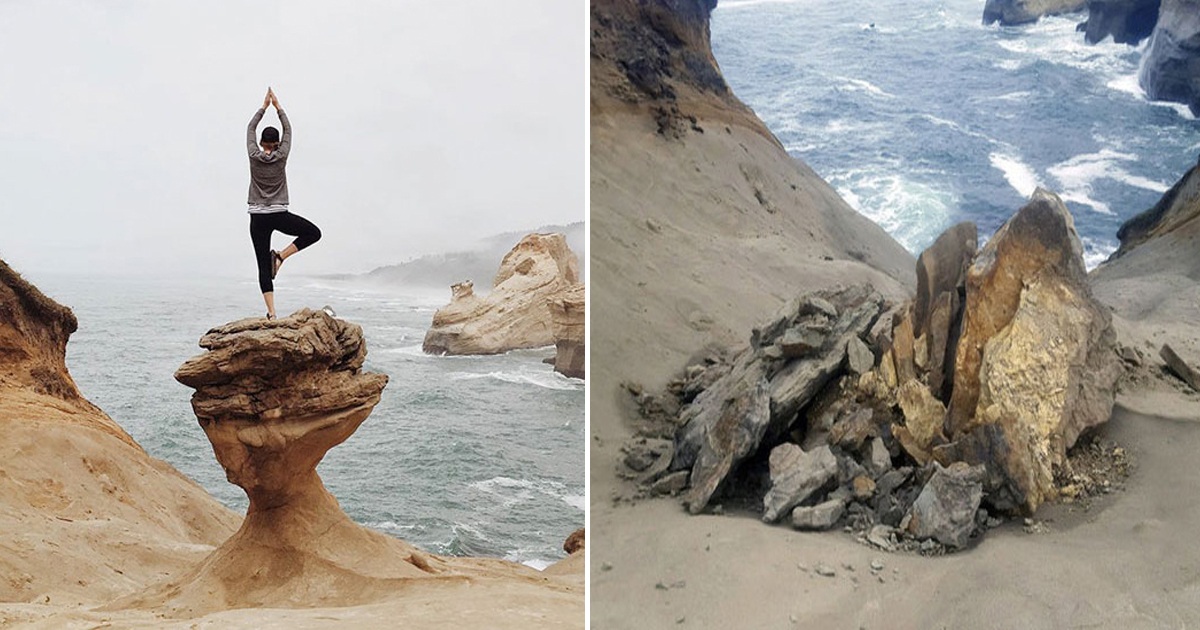 When you’re in Rome, do it as the Romans do. It’s really easy to feel like these things meant nothing to you when you’re simply a tourist who’ll spend a week, possibly two at max. But to a country, those things mean a lot. And it is the job of a tourist to be respectful wherever they are as they come representing many things.

Our ancestors have left us a lot of wonderful things that contain stories and lessons, including the nature that survived their times. But as shown in this list, there are always mindless people who ruin things just for ‘excitement’ or views and likes.

Duckbill in Cape Kiwanda toppled over purposefully by irresponsible tourists.

This baby dolphin passed around for selfie and ended up dying on Spanish beach.

Chinese tourists chasing after peacocks to rip out their tail feathers at Beijing zoo and ended up killing one of them.

Tourists break into Longqiao Cultural and Ecological Park to steal the lotus flowers.

This bison calf from Yellowstone had to be euthanized because it was brought into a car, imprinted itself on it and kept getting rejected from herds.

Chinese schoolboy, 15, scratched and wrote ‘Ding Jinhao was here’ on a carvings in Temple of Luxor, east bank of the Nile that dates back to 3,500 years ago.

In Liangshan Yi Autonomous Prefecture in China, tourists break and burn branches from azalea trees to start a BBQ.

Tourists carve words on the beautiful moss hills of Iceland and one of them was ‘SEND NUDES’ and will take 70 years to recover.

Statua dei due Ercole or the Statue of Two Hercules in Cremona, Italy was damaged badly by two tourists men and they will face charges.

The Statue of Saint Michael while it was on display in Lisbon at National Museum, was toppled by a bunch of tourists trying to take a selfie.

Vandals broke the pillars out of ‘sheer excitement’, has been caught, fined and told to re-erect the pillars back.

Chinese tourists sitting and walking on pink grass in Australia for selfies.

Compared to the beautiful blue hue in 1966 that gave this pool in Yellowstone Park the name ‘Morning Glory’, coins and trash have turned the color into disgusting yellow and it’s now called ‘Fading Glory’.

Someone vandalized ancient Megalithic Tomb from 4,000 years ago with a Harry Potter symbol.

This Margate Beach in UK after a 500-person event was held.

Two Indonesian tourists poured oil on 15 sculptures that are as old as 1,000 years old in La Venta Museum and Park.

Disrespectful drawings on the wall of Mosque in South of Morocco.

Beautiful Sagano Bamboo forest is vandalized by tourists who proclaim their love on the bamboos.

Tourists were fined almost $15,000 after they chased after endangered Tibetan antelopes in cars.

Statue of Dom Sebastião in Lisbon fell apart after a man tries to climb for, as you can guess, a selfie.

Tourist mom spotted burying nappies on Boracay Beach and it had to be closed down for 72 hours for cleanup.

Russian tourist scratched the letter ‘K’ on the walls of Colosseum and was fined $24,000. Fortunately, it has been restored.

More Chinese tourists unable to control themselves from getting too close to wildlife in Yellowstone Park for pictures.