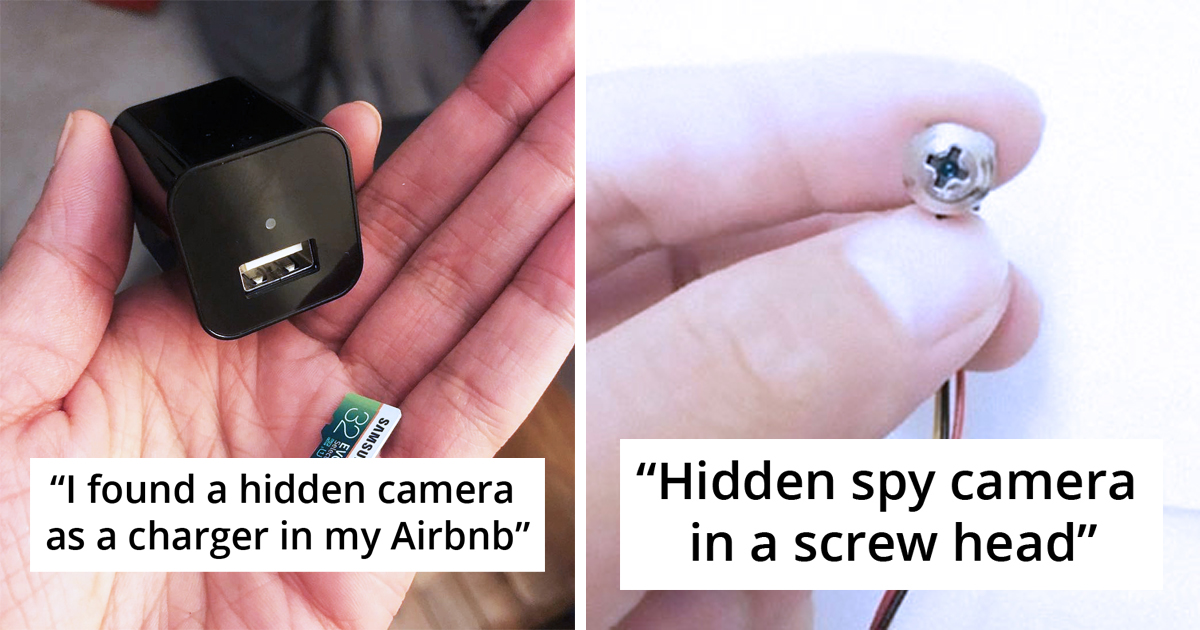 People, especially women, really need to be even more vigilant nowadays. Hidden cameras are being sold on the market for the price of chips and can be installed into anything; you name it. The smoke alarm, the charger, the socket, and the clock – people with malicious intents keep coming with new horrible ideas.

These people managed to spot hidden cameras that would have otherwise snapped some really inappropriate pictures and videos. Are they illegal? Unfortunately, when it comes to Airbnb, you can’t even report the case in some situations.

Hiding a camera inside a water bottle.

Inside a screw head.

This shampoo is equipped with a hidden camera and WiFi.

AirBnb has a strict regulation that doesn’t allow hosts to install secret cameras in their homes. Most of the cases with reported hidden cameras cause the listings to be taken down and the hosts banned. However, it’s safe to say the world is not ready for the widespread fear of privacy concerns as these spy cams become more affordable and prevalent.

“A visitor found an ‘air freshener’ spy camera in a shopping mall bathroom in Russia.”

“Found this camera disguised as a USB charger in the woman’s bathroom at the Starbucks I work at. It was plugged in directly across from the toilet.”

Can you see the camera inside the screw head?

This USB flash drive also doubles as a secret camera.

This couple is shocked to find cameras in their AirBnB.

“This hidden camera disguised as a clock in my Airbnb.”

There are some basic tips when it comes to finding hidden cams. The first is to turn off the light and find blinking lights from cameras. If your calls are getting weird interferences, that can also be a clue of a hidden camera. It is also important to be aware of common locations for hiding cameras such as chargers, mirrors, lamps, etc.

“In ‘Oh, that’s a thing now’ news, a colleague of mine thought it odd that there was a single “motion detector” in his AirBNB in the bedroom and voila, it’s an IP camera connected to the web. (He left at 3am, reported, host is suspended, colleague got refund.)”

“We just found a camera hidden in a smoke alarm case in the private living room of a listing. We were travelling with children.”

The camera is hidden inside the pen holder, behind the green sticker.

This drink which hides camera under the cap.

What seems like a normal alarm clock appears to be hiding a camera inside. Found at a rental apartment.

Camera inside a picture.

Another AirBnb case with hidden cameras.

This socket has been installed with a very small hidden camera.

This hidden camera inside a charger in an AirBnb.

There are also free apps available that can help you detect hidden cameras. But some of these apps can be fishy, so check the permissions they are requesting. Smart TVs with cameras should not be excluded – you can buy a portable small cam blocker for traveling or even a simple black tape to the camera will do.

A camera disguised as a notebook.

The world is unsafe, but we’re not completely defenseless to it. Now that we know where these cams can be hidden, it’s easier to be well-prepared for situations like this. Spending the first 15-20 minutes looking for suspicious spots in your rental location will prove to be worthwhile.

Model And Her Baby Tied Up In $400K Raid After Flaunting Luxurious Valuables November 30, 2020

30 Times People Tried To Be Smart But Failed Hilariously November 30, 2020