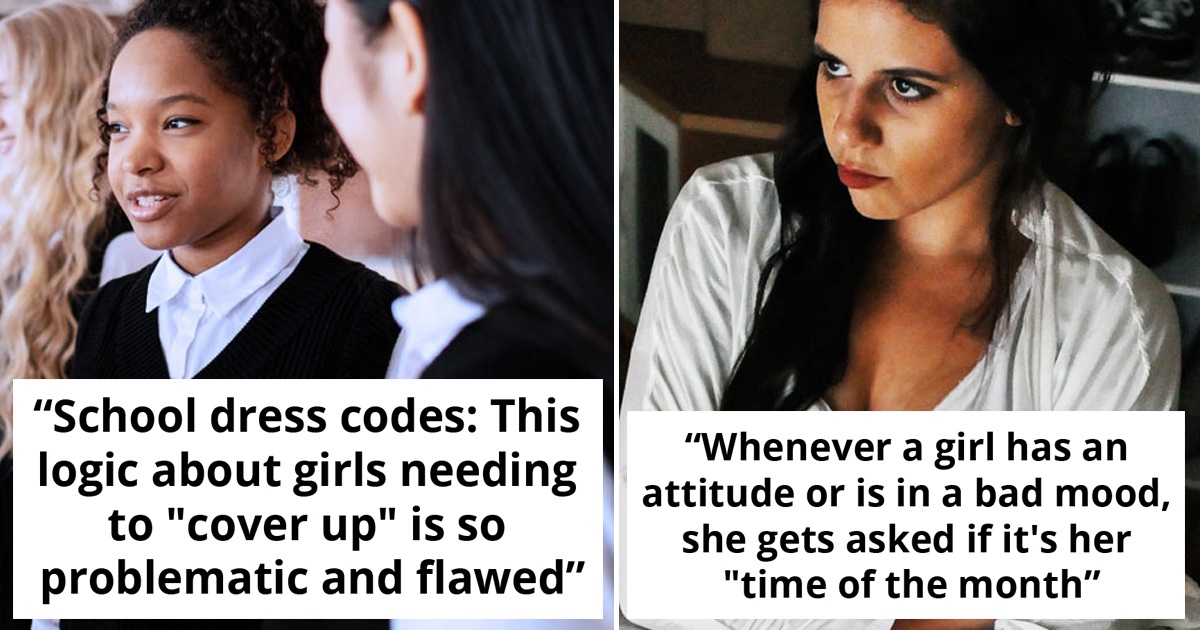 20 Things That Are Blatantly ‘Sexist’ But Are Normalized In Society

There are so many normalized things that we need to break out from. ‘Power To Her‘ TikTok channel is dedicated to calling out some problematic behaviors that people need to stop doing. She started a trend that got many other women to share super relatable sexist subjects.

“The fact that it’s so normalized for women to change their last name after getting married is beyond me.”

“This is the name you got your degree with. This is the name associated with all your accomplishments. Yet society just expects you to pack it up and change it the second you get married.”

Other women have also shared their personal experiences on how society treats them differently just because they’re female. The video has since been viewed more than 1.3 million times.

“School dress codes. This logic about girls needing to “cover-up” is so problematic and so flawed because we’re teaching girls in elementary through high school that we are responsible for how men act when we show any part of their body.”

#stitch with @power.to.her I said what I said. #period #dresscode #girly

“The prefix for women in a society is directly dependent on if she is single or married? It stays Mr. for men their whole life. Not dependant at all on if they are a bachelor or not.”

“Whenever a girl has an attitude or is in a bad mood, she gets asked if it’s her ‘time of the month.'”

“When people come up to me and tell me my daughter’s really beautiful and that I better watch out for her when she gets older.”

“Like, they’re actually expecting our daughters to be sexually assaulted. When you think about it, who are they going to get assaulted by? The boys! But nobody in a million years would come up to boys’ parents when the boy was being boisterous and hitting someone, “Oof, you better be careful of him when he’s older – could turn out to be a predator!”

“Makeup is targeted specifically towards women, and when a man uses it, he’s considered less of a man.”

“Giving the mom full custody on Monday-Friday, and giving the dads the weekends where they get to be the fun parent, no school, no pickups, no homework.”

#stitch with @power.to.her give dads two days but make it Monday-Tuesday 👏 👏

“How male actors like Ryan Gosling or Leonardo DiCaprio can play the lead character their entire careers, but each time their female co-star/love interest gets younger.”

#stitch with @power.to.her tbh I just realized this the other day watching la la land

“It’s not only normalized, but a lot of people think it’s “cute” if a man is incapable of doing the most basic parts of parenting.”

“‘Oh, my husband can’t even be with the kids for two hours without calling me haha.’ ‘That’s nothing, mine won’t even touch the dirty diapers.’ What’s funny about only women being expected to know how to take care of their children?”

“When anything happens to a woman, be it a crime or an accident, they’re almost always referred to as a wife/mother first on a news broadcast.”

“The fact that she’s not referred by her name first but by her relationship to others is messed up. There’s a difference when men are mentioned. It’s always “local man,” and then they later mention that he’s a husband or a father. It’s almost always mother… wife.”

“Drinking. Every time I order a whiskey on the rocks, every guy will turn around like, ‘really, you like whiskey?'”

#stitch with @power.to.her who wants to go have a non judgmental drink with me? #MyFutureThanksMe #stitch #doublestandards #sexist #patriarchytingz

“Where does it say that girls are only allowed to drink wine or sangrias, and if she likes hard liquor, she’s trying to be something that she’s not. And even with roles reversed, why are guys not allowed to order fruity drinks, how does that make him less of a man?”

“Literally everything about traditional weddings. Your dad gives you away so that you can be passed from one man to another man.”

#stitch with @power.to.her why are some people still doing these traditions tho 😅 #sexism #feminism

“You have to wear a white dress because if you’re not a virgin, you’re sh**. It’s bad luck for the man to see the bride on the day of the wedding because back when marriages were all arranged, if the guy saw the bride before, sometimes he would want to call it off because he didn’t fancy her, and that would bring shame on… the bride. That’s also why the veil is a thing. Traditionally, the bride’s family pays for the wedding.”

“I grew her from scratch. I hosted her in my body for 9 painful months. Then, I birthed her into this world, and yet she has my husband’s last name.”

“They tell me I’ll probably change my mind, that I’m too young or that I need to wait until I have at least one child. Even though I don’t want any. But my husband can make a phone call and set up an appointment, just like that.”

“Women are overly told to be polite from childhood. But men were really never ever conditioned to that. We are so not used to men apologizing. The way we are literally so polite it’s actually a danger to us. One of the most famous known serial killers (Theodore Robert Bundy) literally said women are so afraid of being impolite, they would get into a car with a stranger to seem polite.”

“Why do we say “grow a pair” or “get some balls” when referring to a situation where someone needs to be strong or tough?”

“It’s so normalized to ask a woman, ‘when are you expecting to have kids?'”

“Would you ask that if I was a man? When corporations hire women, they usually anticipate that they’re going to take maternity leave and this is considered a due cost for them. And this is something that people use to justify the pay gap.”

“Back in 2017, I bought a house as a single woman; this year, I sold it. My and my partner decided to buy a new house together.”

“With the money I made from selling my house, I put the entire down payment on the new one. The mortgage company, the insurance, home warranty addresses him as the owner of this house and I’m the ‘co-borrower.'”

“If you’re a woman and you’re walking anywhere, and there’s a man coming at you, they’ll expect you to move to accommodate them; they won’t do it for you. I started playing a little game where I don’t move for the man, and the amount of times they’ve run into me, because they expected me to move is actually insane.”

#stitch with @power.to.her My accent in this is so Australian #feminism #stitch #sexism #female #supportwomen #aussie #australian

“Women are forced to take sole responsibility for contraception needs, ESPECIALLY when women are only fertile 3-5 days of the year. Men are fertile every single day of the year. The biggest gimmick of all was that it was sold to us as a way of independence.”