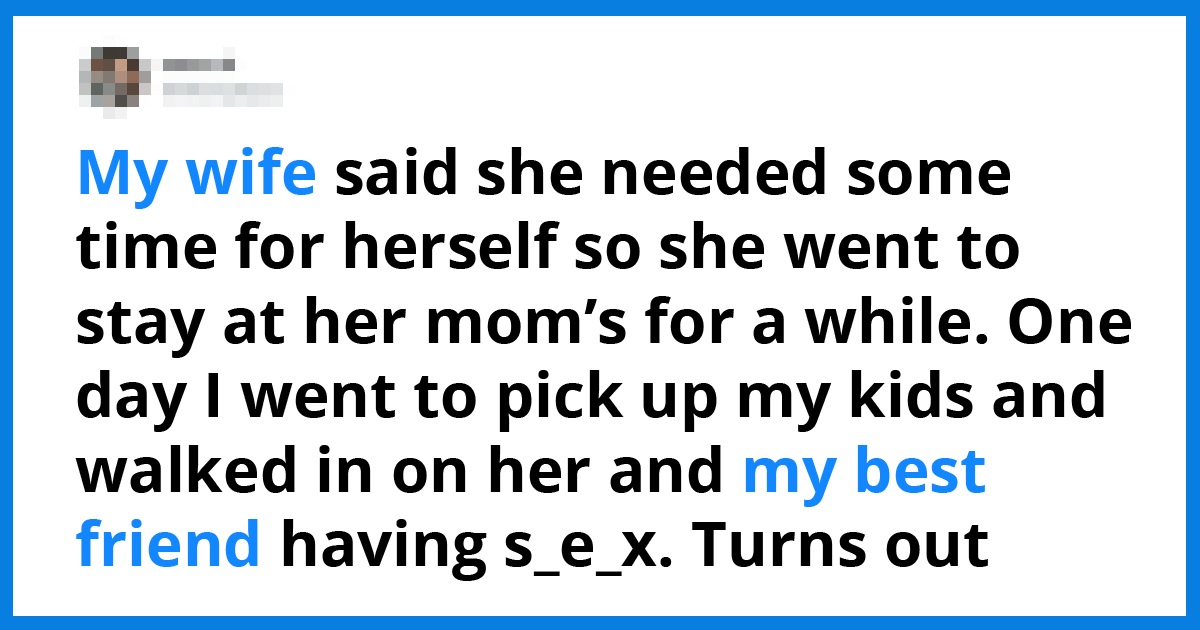 20 People Shared Stories How They Were Backstabbed By Their ‘Friends’

You can never be able to filter out your friends to the point that you make sure none will ever backstab you. Especially if you’re still young and learning about the world, unfortunately, you’ll come to understand some things the hard way. And you shouldn’t have to!

These people share some shocking stories of when people decided they’d be a huge jerk towards them. Betrayals and blatant lies lay ahead, stirring up huge dramas that you’d think would only happen in TV shows. But no, these hateful people really do exist.

“Made plans to go see a movie with my friends for my 16th birthday and planned it weeks in advance. Everybody bailed the day before/of but I decided to still go see the movie. Ran into my whole group of friends leaving the movie theater while buying popcorn.” – Sweetzombjesus

“Best friend stopped talking to me after my dad died. Took the whole friend group with him. Apparently, I was “too emotional.” I was 13. Having my entire friend group walk away from me when I was in such a sh**ty place stuck with me forever.” – genericname619

“Asked two of my friends if they wanted to live together in college. Then one of them asked another person in our friend group if he wanted to join in as well. Then they asked another… and another. And then once there were too many people for one apartment, they dropped me out of it.

No longer “friends” with any of them. Was kinda a wake-up call though because I definitely gave way too much of myself to those people not knowing that I was the most expendable one. It really taught me not to put others on a pedestal and respect myself more and has since led to me developing far more healthy relationships that bring me a lot of happiness.” – Sighborgninja

“She slept with my boyfriend because she thought she was in love with ME? Wackest sh** I ever did hear.” – uglymoz

“I had one friend. I was bullied by everyone at elementary school. Because my friend would be bullied too when they hung out with me at school, we only played outside of school.

One day a popular kid asked to play with me during recess. I was ecstatic! Until after a while they said, “You’re not as bad as ‘friend’ said you are.” And that’s how I learned WHY I was bullied.” – Reddit

“Been very good friends for over 2 years. Their roommate moved out and they asked me if I want to move into their spare room. I was very happy to live with my good friends and I did everything I could to be the best roommate possible.

After 3 weeks they found another source of income and kicked me out. First, they offered to help me find another accommodation but the next day they changed their mind and just told me to leave by the end of the month (it was 7 days until the end of the month). They didn’t speak to me ever since. When we met somewhere in town they acted like they never seen me before. I have no f**king idea what I did wrong.”niC00L

“He accused me of sexually assaulting his younger sister who was basically my little sister too, at the time. It’s completely false and it’s the most mind-boggling thing that’s ever happened to me.” – Reddit

“My friends told me to “grieve better” after my boyfriend died.” – J-Bad

“A ‘quiet’ girl I made ‘friends’ with would only sit with me in class just so she can go snitch about me to my ex-friends. She would literally sit next to me for one or two classes( randomly) then go sit with them (later).

I called her out on it after she came to sit next to me and told her “why do you even bother sitting with me when we both know you’re just trying to get sh** to talk about me with them. When I come back from the bathroom you better go sit somewhere else.”

I was usually very quiet and that was the first time I stood up for myself.” – elizzzzzabethqq

“I had one friend who honestly wasn’t my favorite person because she was really manipulative, but I never said anything bad about her. I found out that she had been sh** talking me to all of our mutual friends and telling them all that I did horrible things that I never did. Ended up essentially being pushed out of that entire friend group and it ruined a lot of my high school experience.” – maaadchillbro

“I had a best friend that I knew for 16 yrs. She got pregnant and her parents tried to kick her out. Her parents wanted her to get an abortion but she refused. One of our HS friends told me someone should push her down a flight of stairs so she can miscarry. I told her that’s a very bad idea and defended my best friend.

The next day, the principal came by my class to ask me if I could attend a meeting about something important. If I didn’t attend, I was going to be expelled. When I arrived to the meeting, our shared friend claimed I was going to shove my best friend down flights of stairs so she can miscarry. My best friend believed her. We stopped talking after that.” – usagi1288

“We (my husband and I) had a friend that we helped get back on his feet. Paid off some tickets he had. Got his license reinstated. Hooked him up with a solid connection for a reasonable, well-running car to replace his beater… AND gave him a place to live and a job (automotive repair)… he decided it was a better choice to tell all our customers we were overcharging them (spoiler: we weren’t) and he’d do the jobs cheaper if they’d bring it to him at his house (this was a short time after he moved out of our house, after never repaying anything he owed us. Not that we’d asked). Broke my heart…” – NakedKittyAlucard

“My wife said she needed some time for herself so she went to stay at her mom’s for a while. One day I went to pick up my kids and walked in on her and my best friend having sex. Turns out it had been going on for a while and she knew him before she knew me (which I had no clue about).” – LonesomeHebrew

“Years ago when I did a health science undergraduate degree, most of the cohort was determined to get into medical school. Our medical school program mainly accepted students from only our competitive undergraduate course, due to subject prerequisites. We all knew each other and were friendly, hanging out together and forming study groups.

Many of my friends were great – we shared tips, resources, practiced exams and interviews together. But there was a handful who really wanted to get into medical school, and since the program ranks applicants mainly based on undergraduate results, the better your friends perform, the lower your ranking is for selection.

So near application time, some of us would head off to the university library to borrow out textbooks to find chapters or page numbers that the lecturer mentioned would be on the exam. And they would be ripped out. You’d go and find another library copy of the textbook, and that page would be ripped out too. All of them, totally removed in a hurry.

I didn’t believe that someone from our cohort did it until interview practice began. Students began obtaining copies of the questions from previous years and lying when others asked if they had it. I saw someone give a terrible, awful interview answer and the other student would give them glowing feedback and inform them they should say that, word-for-word, during the interview. It was a sh**show and a lot of relationships fell apart or were never the same again.” – manlikerealities

“Had a good bud of mine, who’s the godfather of my son, living with me and my wife. I travel a lot for work and was out of the country for about 6 months in the Middle East. Came back and found out she was pregnant, with twins, and that they weren’t mine.” – Nephilimelohim

“I booked a table for 6 people to watch a sports event at a bar. I tell them so. All 5 friends say OK we will be there. No one shows up or even has the decency call or text that they were not coming.” – bjrni

“Friend only listened to me to tell all of my secrets and spread rumors about me. fun times.” – sugargrasses

“Friend told me they weren’t doing anything for their birthday. On the day of their birthday, photos appeared on Facebook of them out with the rest of our friends. They’re not my friends anymore.” – Dio_Dragon

“A woman I thought was my friend (we worked together for years, our kids were friends, I helped her and her husband out when he was having mental health problems, she was in my sister’s wedding party) appeared in court as a witness for my ex-wife in her bid to gain full custody.

THANKFULLY she failed and I now have custody of my kids. I haven’t spoken to my “friend” since.” – friklfrakl

“A guy who seemed like a good mate when it was just us, and then as soon as there was someone else, or a group, he took the piss out of me and tried to make me the butt of all jokes. Even worse if there were girls around. After a while, I called him out on it, and he was just like “dude, it’s just a joke,” but I was done with him after that.” – Reddit