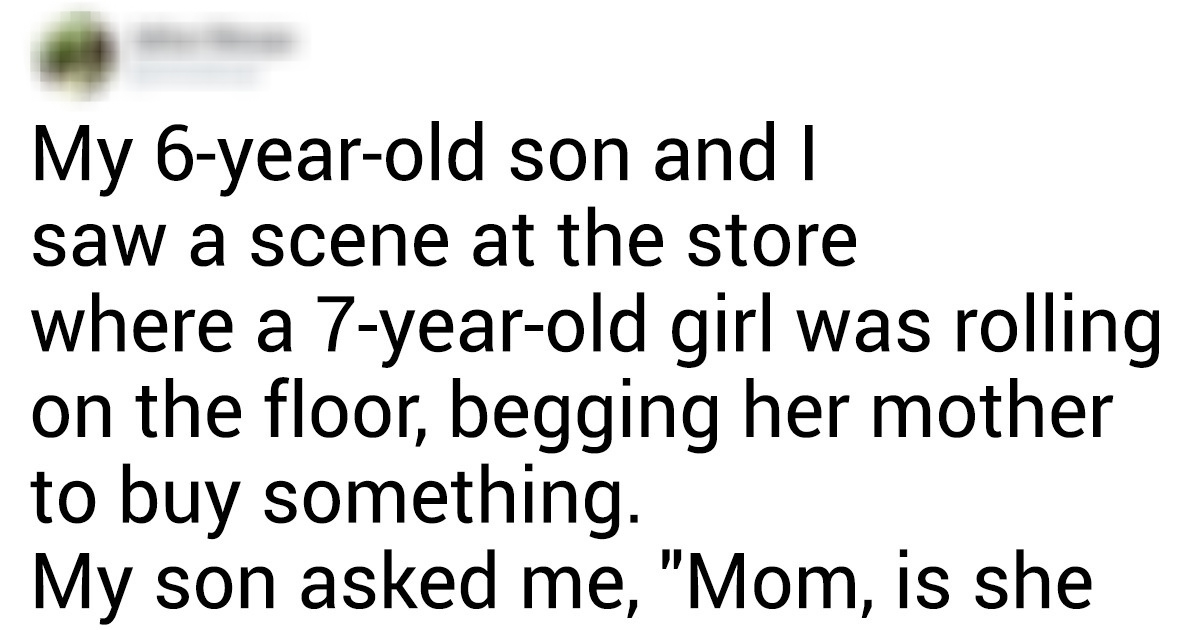 15 Times Children Outsmarted Their Parents With The Things They Say

Children are so precious and can be likened to little angels. Except for the time when they sternly refuse to eat their broccoli, carrot and peas, make a mess with their toys, they are truly angels. They also learn fast, catching things they hear and see, imitating adults and watching them grow into their own person is such a gift.

But there are also times when they speak of things unprecedented to us. They are really unpredictable creatures, but Greenlemon knows you will enjoy these 15 conversations from them.

While walking my 4-year-old niece to the playground, she met a boy of her age and played with him there. As we went home, she said, “Thank God, I found a boy today.” © Molnia

My son suddenly asked me what kind of flowers I liked, I told him I like lilies and daisies, too. He asked me to show him pictures of those flowers and while looking them up on my phone, he said, “I’ll them to your grave when you die.”

That’s, well, a very unusual way to show that he cares. I wasn’t sure how to reply to that. © CoffeeTree / Pikabu

I told my 6-year-old daughter to add onions and garlic to her soup. She said, “No.” So, I told her they kill germs. She simply replied, “I wish chocolate does that, too.” © Zluka

Me and my grandma came home to your 4-year-old girl alone. My grandma asked where her dad is. She just shook her head, pointed to the bedroom and said, “He said he’s tucking me in the bedroom.” © Marina

A dad was warning his 6-year-old boy about avoiding dangerous situations. He told him to avoid puddles or his feet will get soak, to always look both ways when crossing a street or a car will hit him, not to climb a fence because he can fall and not to jump from the deck for he might break his legs.

His son simply called him a coward. © Family

My boy came home from the kindergarten with a new toy, so I asked him where he got it from. He said he traded with Jason and got a toy car. I asked what he gave in return. He paused, think and said, “I gave him a kick.” © Alice

My daughter was making a fuss during lunch, so I said, “Jane, enough! You’re behaving bad. I’m going to tell you on your grandparents when they come over!”

Jane said, “No! Please don’t tell them, I want this to be a surprise!” © Mary

My 4-year-old daughter, Ann, asked me if I have a job yet. I didn’t, so I said no. She replied proudly, “You’re doing this wrong. Look, how if you take me to the kindergarten? Ashley’s mom also take her there and then she drives to work. You can just follow her along!” © Catherine

My son asked me to have cereal with him, but I said no because I was on a diet so I could look beautiful. With a slightly shocked face, he said, “You should wear a necklace to look pretty, not lose weight.”

We parked our car under a tree when visiting a store and during that, birds left some ‘presents’ on the roof of our car. So we made a quick visit to the car-wash to get it cleaned. After it was cleaned, my boy said, “The birds will look at this clean car and think they did all those pooping for nothing!” © Panaramix

Dad: Let’s offer Mark 15-minute of cartoon if he eats the red caviar. Let’s go.
Mom: Mark, do you want to watch cartoon? For 15 minutes?
Mark: What’s the food this time? © Kassia

My daughter has been asking me not to leave for work and then said she wants to come and work with me. I asked her what she’s going to do at my workplace. Looking embarrassed, she said, “I’m going to be… um… daddy’s sweetheart.” © cat

I was doing makeup for a party and like a normal kid would, my son asked why was I drawing on my face. I said, “So, I look very, very pretty, hun.”

He said, “That’s not going to help…” © hannahlit

We were playing as princess and mermaid in the bathroom. I told her because I’m the princess, I’m supposed to marry the prince. She was surprised and asked, “What? So, I’m going to have to marry a diver?!” © Sky

Me and my 6-year-old boy saw a 7-year-old girl begging for something from her mom while rolling on the floor for it. My son asked me, “Is she stupid?” to which I answered, “Yes.”

The angry mom retorted, “YOU’RE stupid.” But all it does was simply made my son realize how influential gene is. © tuktuk5999 / Twitter