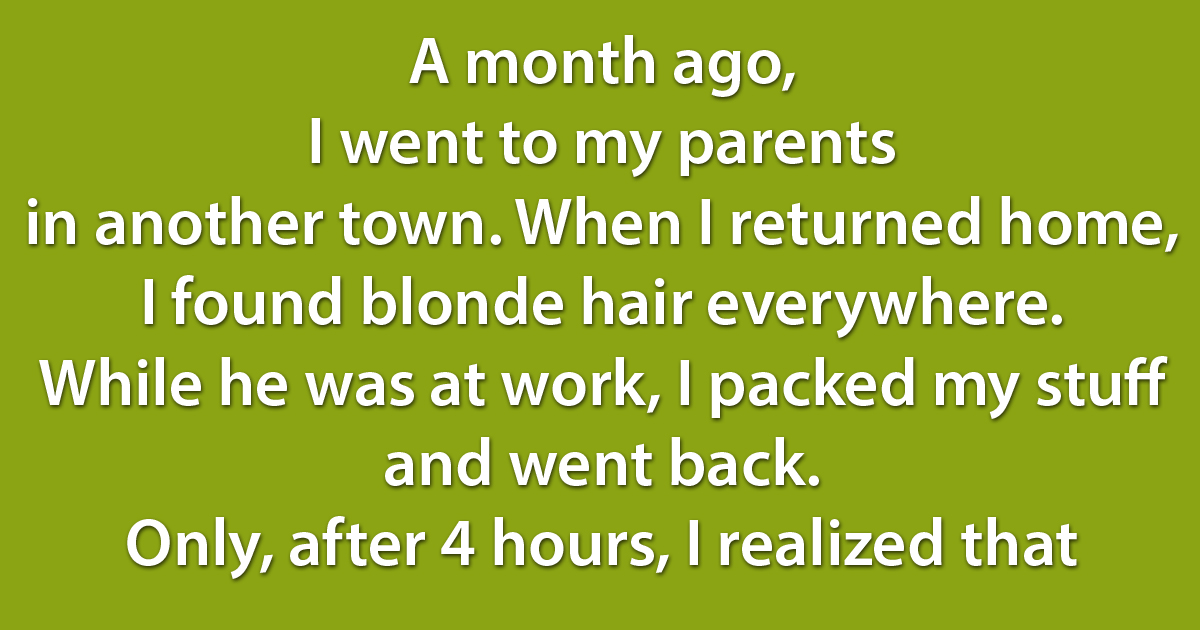 12 Real Stories By Women Who Had Amazing Sense Of Humor

Men are not the only people with humor, surprised? In fact, women love to tell things like stories and it makes them more entertaining and easier to remember. Add a great sense of humor and you find yourself enthralled in a story. Here are 12 stories Greenlemon found told by women with an on-point sense of humor.

I was a walking disaster a kid and there was one time where I walked into a glass door and made a terribly loud noise. That very same day, my mom and I walked into a store and I actually pointed to something and told my mom, “Look at this scary dummy, mom!” Well, that wasn’t a dummy. That was a salesperson who was just standing still.

I came home to find a lot of blonde hair at home as I had brown hair. I packed my stuff and went back to my parents, only to realize 4 hours later that I was a blonde. I dyed my hair brown here, at my parents’ place and told my husband that my parents wanted me to stay longer, hence why I returned late.

While at the subway, one of the yellow balls in the sack-shape keychain dropped. They rolled to the end of the car and because I was too lazy to pick them up, I just sat and wait. It rolled back to me sometime later, so I picked it up. But an old lady who saw it looked as if I had done witchcraft. © Overheard

My parents used to warn me that men only want one thing and that I should always be careful. Now that I’m 28, I figured out that men like watching YouTube videos, sleep, eat, leaving me the one who wants that ‘one thing’. © Yuriy8 / Pikabu

I once got a cold and totally lost my voice. During this time, my husband and son would poke fun, saying stuff like ‘Don’t scream at your husband’ and ‘It’s been quiet lately.’ I wanted to come back to them, but all I could do was hiss. So, I plan to have a karaoke session with Aerosmith’s songs later. © Overheard

I used to wear a giant pair of glasses to school and that makes me a target for bullying. One of the kids who liked to tease was a very fat boy but polite-child-me couldn’t tell him that. The teachers did not spare a second to tell him that when I broke down and cried, though. © Overheard

I went to a cafe on my birthday with two other friends. There was this waitress who caught my eye, a short-hair with piercings, alien-like face, and tattoos. She looked cute and I wanted to invite her for a photoshoot session as I was a photographer. She looked shocked and said, “I’m actually a guy and the name’s Ted.” © Overheard

I was an open child and liked to copy the phrases I learned from the adults. One time when I asked my mom to pour tea as a joke, she replied, “The poor don’t have servants.” Phrase copied, so when the teacher asked me to clean the board tomorrow, I used that same phrase. That didn’t end funny and we got called to the headmaster’s office. We just end up laughing about it and I didn’t get reprimanded for it. © Overheard

A bus driver realized one of the doors was open and closed it. But a passenger told him to keep it open because it was hot. The driver asked, “But what if someone falls and injured?” The passenger replied, “I’ll pay their treatment, so just keep it open.” © zum_ka / Twitter

A girl was crying hard in the bus while looking at her phone. Having just experienced broken heart recently myself, I went over and consoled her, telling her not to cry and that he’s not worth it. She looked confused and said, “I just got my new schedule and I’m having 7 lectures every single day.”

She continued to cry and I realized my problem just cannot sum up to that and it made me feel better.