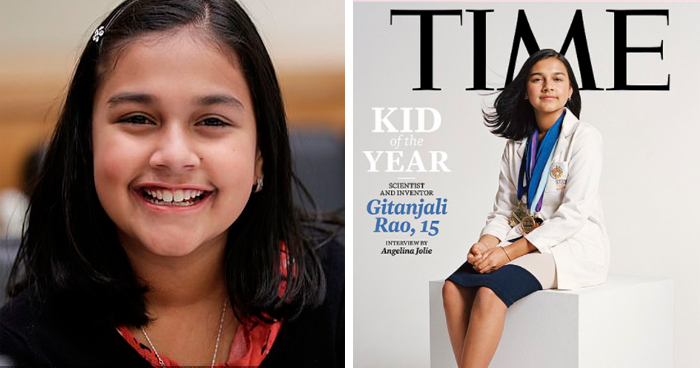 15-Year-Old Gitanjali Rao’s problem-solving skills using technology have skyrocketed her into the limelight, and now she’s amassing numerous awards and applauds. The young scientist and innovator have both her heart and mind fixed on solving the challenges humanity are faced with. Gitanjali believes that unprecedented problems require innovative and tech-oriented solutions, and indeed the Indian-American quest for learning makes her quite a superhero.

Now, she has indeed made the headline as TIME’s magazine Kid of The Year for her use of technology on social change. The teen’s mission is to develop a global community of young innovators in solving world problems. In 2017, Gitanjali was named America’s Top Young Scientist, having invented a device that detects lead contamination in water. The device was called the Tethys.

Tethys has four main components, the housing processor with a Bluetooth extension, the core device, a slot to enter a disposable lead-testing cartridge, and a 9-volt battery. The device can be connected to your smartphone, and it’s housed in a blue, 3D printed plastic box.

Gitanjali’s love for science had started at age ten and had equally invented a carbon nanotube sensor technology, which uses molecules to detect chemicals in the water. Her most recent project is titled: ‘Kindly,’ which uses artificial intelligence to detect cyberbullying. Among the 5000 nominees for Kid Of The Year, Judges were amazed by Gitanjali’s use of tech in combating social issues, including opioid addiction.

‘I don’t look like a typical scientist. Everything I see on TV is that it’s an older, usually white man as a scientist. It’s weird that people had assigned roles regarding their age, skin color, and gender. My goals have shifted not only from creating my own devices to solve the world’s problems, but inspiring others to do the same as well.’ Gitanjali said in an interview with Angeline Jolie.

She added: ‘From personal experience, it’s not easy when you don’t easy anyone else like you. So I want to put out that message. If you can do it, you can do it, and anyone can do it.’ Gitanjali, a student at STEM school highlands Ranch, added.

However, the three-time TEDx Speaker hopes to study genetics and epidemiology at the Massachusetts Institute of Technology.