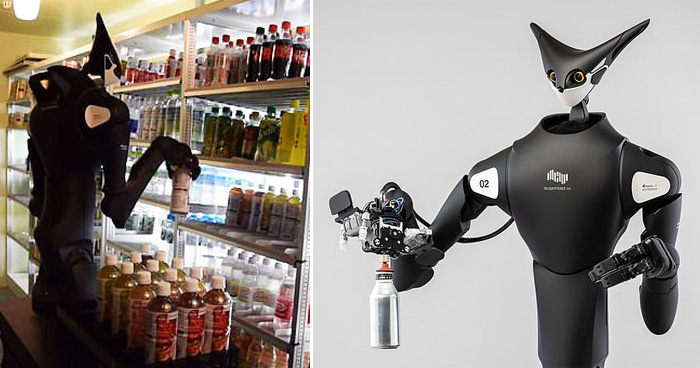 Japan is well-recognized for its super robots and right now, a cool machine that appears like a slender man with ears has gone viral online. Spotted in Japanese convenience stores, the remote-controlled slender robots stock empty shelves with bottled drinks and other grocery items.

In an attempt to promote social distancing among workers, Japan’s 2nd largest convenience store chain – Family Mart collaborated with Telexistence, a robotic company to build an android stock boy named Model-T. Instead of using Artificial Intelligence, Model-T is literally connected to a human operator who operates the robot’s movements.

Remotely controlled using virtual reality, the 7-foot tall robot has a huge range of motion, essential for lifting and moving products from one place to another. With a lag time of an estimated 50milliseconds between the machine and operator, the Model-T rolled out at Lawson, another store that’s a subsidiary of Mitsubishi.

In the FamilyMart’s pilot program, an operator logs into the virtual reality terminal from Telexistence headquarters situated in Toranomon, Tokyo, and remotely operates the Model-T installed at a store 5 miles away. The convenience store admitted it wants to create an entirely new store operation by making restocking duties automated and remote, saving a number of labor-hours. The Model-T doesn’t, however, move fast or remove the need for human employees.

Turned out, an operator could theoretically manage the movements of numerous robots in stores with the same inventory and layout. In the interim, Model-T is permitted to restock plastic beverage bottles from the back of the store, but once its speed and accuracy are improved, it will handle popular items, including sandwiches, bento boxes, and even rice balls. On the other hand, Family Mart plans to deploy the Model-T in up to 20 stores by 2022.

14 People Share The Darkest Secrets They Found Out About Their Family January 25, 2021