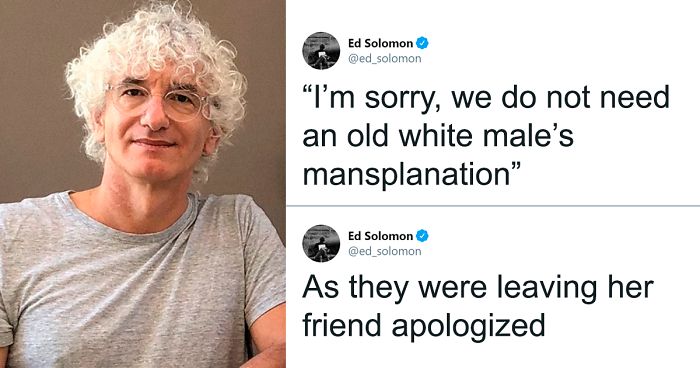 Women Told Man Not To Mansplain ‘Men In Black’ To Them, Turned Out He’s The Writer Of Movie

For a second, let admit you’ve written one of the biggest blockbusters in Hollywood, it became a cult classic having boosted Will Smith’s movie career.

The movie became so popular that’s people still talk about it decades after its official release. And then, you overheard one of these discussions, where two women were arguing over the storyline.

Politely, you keyed in, offered to settle the dispute, but got rejected and accused of mansplaining. Sounds odd, right? It more like the whole scenario could create a whole new movie script, perhaps a short interesting one.

Well, stop the fantasy, thanks for the seconds’ imagination and let’s face the reality here! The above description what was happened to Ed Solomon, the main writer of Men In Black.

‘The argument was that someone from where one of them works looked very much like the guy from Men In Black. One of the women then said she didn’t know it because she didn’t watch comic book movies. Responding, the other woman said it wasn’t a comic book movie,’ Ed Solomon told Bored Panda.

Reality Check: The Sci-Fi Flick was modified from The Men In Black Comic Book Series, originally created by Sandy Carruthers and Lowell Cunningham. The main storyline was centered on a secret government agency that policed several alien and supernatural terrorizations to Planet Earth. It was faced with just 6 issues within 1900 and 1991, before being picked up by Hollywood.

Ed Solomon continued: ‘I planned on introducing myself and then settle their dispute, but as soon as the first woman made a joke to her friend about being mansplained, I stepped away on receiving a phone call. And when I finished the call, one of the women had left while the other was heading out of the bathroom.’

It’s didn’t, however, end there. ‘It turned out one of the women was actually a kid in high school. She reached out to me after seeing my tweet on Reddit. She was actually sweet and we had lovely exchanges and laughed out loud about it. She, however, later felt bad for her joke. If I haven’t gotten the phone, we would have continued the conversation.’