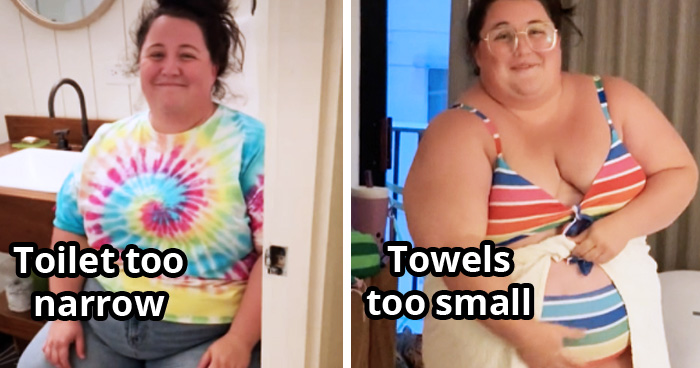 Meet Mary Fran Donnelly, a teacher, and body positivity advocate. Just recently, the 27-Year-Old launched a clip series titled “Traveling as a Fat Person.” It mainly features her personal experience, and indeed, her latest highlights how the hotel she lodged in during a family vacation wasn’t suitable for plus-size guests. From small towels and tinier chairs to the tiny toilet, Mary Fran’s clips have garnered over six million views on TikTok.

Mary Fran Donnelly, 27, has demonstrated how unsuitable the hotel industry is for plus-size guests.

The clips perfectly describe how much the hotel industry is far from catering to people of different shapes and sizes. In particular, Mary Fran and her sister were left startled by their hotel’s bathroom layout. Instead of being all angered about it, the social studies teacher handled the matter with a sense of humor, pointing out all their room’s design flaws.

In a series of clips, Mary Fran showed all the flawed designs and objects that weren’t for plus-size people.

Because Tik Tok thinks I’m bullying MYSELF, here’s the re-upload for the besties

As fun as it may appear, it’s not always easy to cope with such situations.

“Let’s take a look at the bathroom. Would you like to take a pee or a poop? Don’t worry; you’ll barely fit.” Mary Fran said at the beginning of her first video in the series. Moving to the shower, Mary Fran also showed the harsh reality of using the bathroom’s towel to dry off, but as she demonstrated, it didn’t fit either.

Mary Fran’s incredible sense of humor has made the tour video go viral with millions of views on TikTok.

The hotel pool towels appeared to be a bit far!

The hotel pool towels appeared to be a bit far! Mary Fran revealed that the towels often leave a wearer having to pick between covering their back, side, or the front of their body. “After a swim, maybe you want to go sit on the balcony.” Mary Fran stated in the hope of enjoying one of the hotel’s amenities. She continued: “Oh look, a lovely table with a chair. Will it house me? I’m not too sure.” Mary Fran eased onto the chair but instantly snorted a laugh and sarcastically called it stable.

Traveling as a Fat Person Episode 2

Mary Fran’s videos reveal just how the hotel industry is far from prepared to cater to everyone.

Each of the demonstrations depicted the real challenges that she and others face when completing daily tasks and actions while relaxing during a vacation. However, many people in the comment section found Mary Fran’s experience relatable. On the other hand, a few people gave thousands of recommendations on alleviating some of such stress; this includes bringing towels from home and, importantly, researching hotel room measurements beforehand.