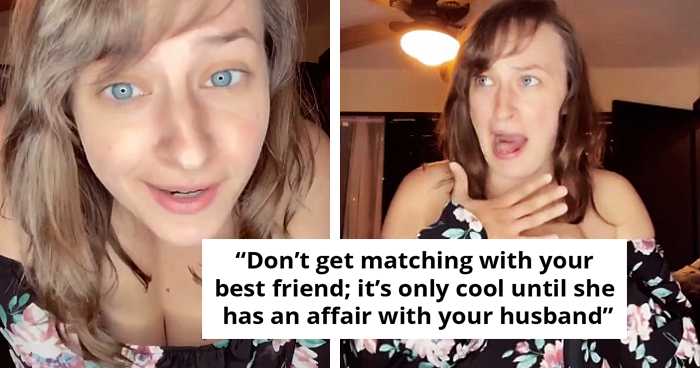 From friendship bracelets, half-heart necklaces to matching tattoos, people have always sought creative ways to show the world how much they love and care for their best friend. Natasha, an American mom, meant good and was all delighted when she decided to get a matching tattoo with her best friend of about twelve years.

Natasha urged people not to have matching tattoos with best friends after hers stole her husband.

But little did she know that the decision will one day eventually be a thorn in her flesh. Natasha couldn’t believe that her best friend would have the audacity to steal her husband. In early April, Natasha made this revelation to the world in response to a TikTok trend that asked: “What’s a mistake you learned the hard way that you can now help others avoid?”

The best friend had an affair with Natasha’s husband and started raising her children as if they’re her own.

Keying into the trend, Natasha instantly urged people not to get matching tattoos with their best friend. She said: “Don’t get matching with your best friend; it’s only cool until she has an affair with your husband, takes over your entire life, and starts raising your children as if they’re her own. So much therapy though, really so much f***king therapy.”

The tattoo description reads, “You Keep Me Wild.” Natasha shared how the word best friend forever is also inscribed underneath it in a Morse code.

The clip has garnered over 1million views on TikTok and has since prompted a separate clip of her inking. Zooming in on her foot, her tattoo description reads, “You Keep Me Wild.” Natasha equally stressed how best friend forever is inscribed underneath it in a Morse code. People have since reacted to Natasha’s story, with many claiming it makes for a lifetime movie. However, a few wished her all the best and argued she deserves so much better.