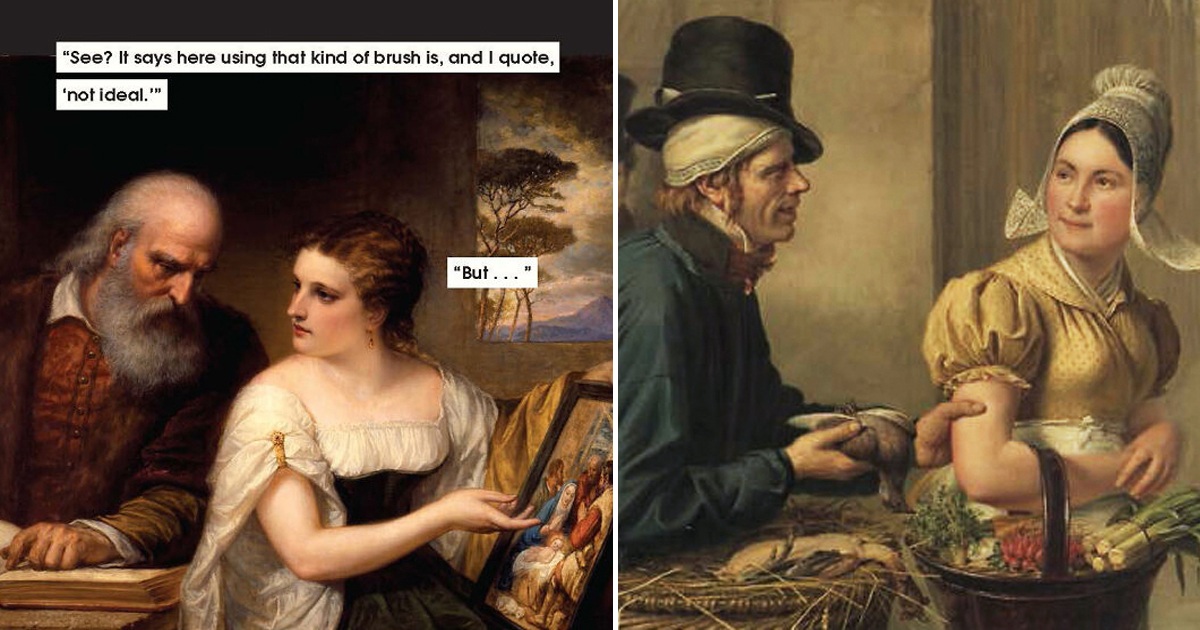 In no way do we think that women are superior when talking about toxic men. But just by being a reasonable human being makes anyone, including men themselves, better than their counterparts. Unfortunately, in the year 2020, these paintings of men exerting their dominance, and mansplaining things are still very relevant.

You don’t have to explain a joke to someone if you’re not asked to. Men shouldn’t be assuming that women are oblivious about things just because they’re born with different genitals than you. Nicole Tersigni began her ‘Men to Avoid in Art and Life’ thread out of a whim, but it soon went viral as people relate so bad to them.

This is Nicole Tersigni who started the fine art memes on toxic men.

After the thread went viral, literary agent Rachel Sussman looked for her and asked if she wants to turn them into a book. The book was titled ‘ Men to Avoid in Art and Life’ and has been published on August 10th, selling out within 48 hours.

‘Men to Avoid in Art and Life’

Tersigni inserts hilarious dialogues between men and women, such as this man who quoted to comment on a painter’s skills.

She explains that she starts by googling classical pictures of women surrounded by men. From there, her collection grows and she finds other paintings with funny faces that she can come up with jokes on. She loves to start by guessing what the people were probably talking about.

She purposefully finds pictures where both men and women are present, and their facial expressions can be seen clearly. While she looks for them, she also often find women giving these blank stares at men. Then, she gets an idea just from judging out of the scenery.

Since the books were released, Tersigni has received much positive feedback. People are sharing how these new versions of fine arts have been so relatable to them.

These edits look super hilarious because these people are using terms we’ve only recently used, and the dialogues are still accurate with the scenes!

The lessons these jokes and paintings are pretty simple: do not make sexists or offensive jokes towards women. Respect them like you would respect just any other men. Stop feeling like you need to teach them things because you assumed they need your help all the time. Be reasonable when offering help.

Honestly, none of these are even new to note. If you truly respect women, you don’t even need a set of rules or regulations on treating them.

We sincerely hope that there will come a time period where people cannot relate to these jokes anymore. Oppression towards women and racial injustice should be topics that no longer exist in a world where equality has been accepted.