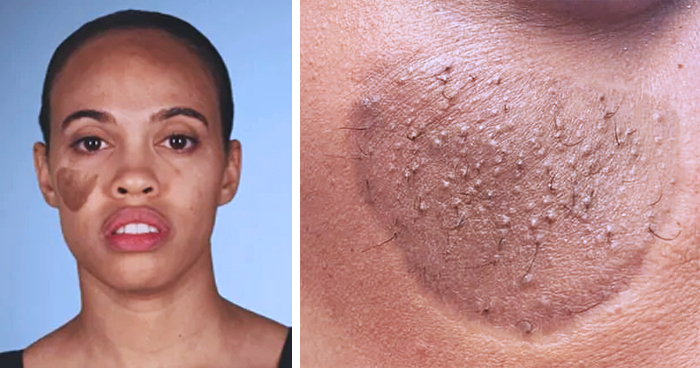 Ever asked yourself, ‘Why do we (humans) have public hair?’ Public hair is one of the numerous things that unites most of humanity. Regardless of who you are or where you are from, we all grow public hair having reached a certain age. But seriously, ever imagined the growth of public hair on the face? It turned out, a woman identified as Crystal Coombs does have public hair growing on her face after a skin graft.

Due to a childhood dog bite, doctors had used a skin graft from Coombs groin to fix a patch of her face. But now she’s growing hair from it. A skin graft can be an incredible thing as doctors take skin from any part of your body and put in someplace new, precisely where you need it.

Coombs, in a clip for a new episode of Botched where she tried to get assistance, explained she got bitten by a dog at aged nine and was instantly sent to the ER, where doctors asked her to wait and see a plastic surgeon in fixing the chunk of tissue that was bitten off her face.

Eventually, Coombs met the plastic surgeon who opined they do a skin graft from her groin. The surgery was successful but did an unexpected twist – hair started growing. ‘It was literal public hair.’ Coombs said, adding that she can’t, however, remember the doctor saying at the time it might happen.

‘So you were getting public on your face? Dr. Paul Nassif, Botched surgical star and MD, asked Coombs. She confirmed: ‘Yes. Literal Public Hair! I don’t believe that the doctor mentioned I would grow public hair out of my patch. I don’t remember that.’

Dr. Terry Dubrow, Botched MD, claimed it was odd for the doctors to choose the groin for a skin graft, adding that ‘It’s interesting why they choose if from the groan because there’re so many places. They could have done the back, the abdomen. You obviously wouldn’t do those armpits.’

Coombs had lived most of her life without worrying too much about the skin graft, but on becoming a mom, she’s concerned about her daughter getting bullied or teased when she finally starts going to school. Nevertheless, her request on the Botched show was to replace her facial patch, making it minimal as possible. Fortunately, Coombs is much better after her surgery on Botched.