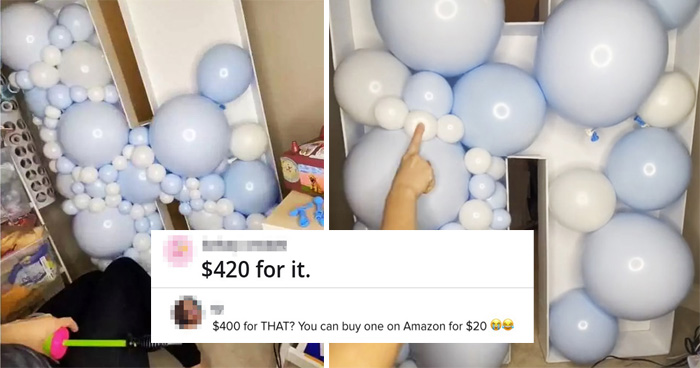 Woman On TikTok Slammed For Her ‘Overpriced’ Balloons

Let’s get this straight – this woman isn’t out here selling balloons. She’s renting them out.

A few days ago, a TikTok user who recently posts her garland work got flamed as people think she is overcharging her services. ‘That Balloon Girl’ Kelsey Onstott is based in Texas and regularly gets between 500k to one million views on TikTok.

After multiple people kept asking for pricing, she finally revealed it.

She has now posted three process videos of her setting up balloons with pricing. The first was a mixture of rustic green, dim yellow, white, and sky blue balloons that vintage vibe. At the end of the video, she reveals this whole setup cost $420.

In her second video, it was a birthday party set up with a red and blue combo.

Onstott reveals that for these 5 ft tall numbers, she charges $250 for each. So both of them would cost the customer $500.

In her third video, she decided to challenge people.

As she puts up a giant letter H with a soft baby blue theme, she is looking for people who can spend $5 in the party city. She also adds that her balloons are custom colored and actually has that popping color as opposed to regular balloons. The TikTok video has been seen over 18.5m times.

Meanwhile, everyone else holding popcorns, getting cozy under the blanket for the drama.

One woman accepted the challenge and did her own letter ‘N’ with a rose gold theme.

Sarah’s hard work has received more than 2.1m likes and seen 9.2m times. Speaking to Buzzfeed, Onstott reveals that she pours “blood, sweat, and tears into my business.”

After resigning from a boring corporate job, she turned her balloon job into full-time and have had satisfied clients. They also don’t find her prices shocking as they are not about to make one themselves either. She also explains that as a 30-year-old woman, she is happy to be running a profitable business.