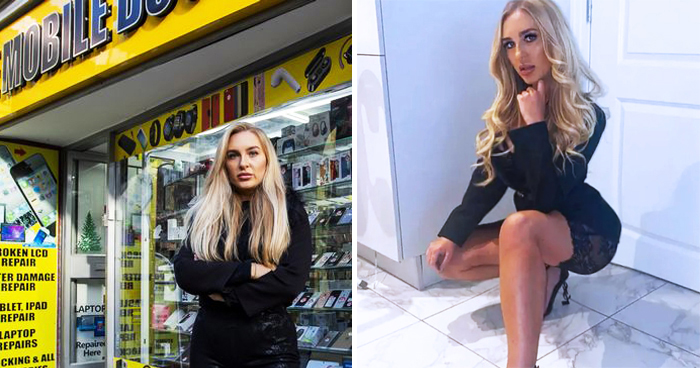 Louise Johnson called the police on a man who was caught looking through her personal pictures she sent her boyfriend for 15 minutes, but they couldn’t arrest him.

The 28-year-old had sent her iPhone 11 for a fix after dropping and smashing the screen on the floor. She agreed to pay The Mobile Doctor $115 and came back to collect her phone, but was shocked to see the creepy man going through her old, intimate pictures without her permission.

He spent 15 minutes looking at them and the cops were called. But they told her that he couldn’t be arrested.

“As soon as I walked in, I saw him lock my phone and put it to the side, but I saw my wallpaper, so I knew it was mine. I asked whether my phone was ready, and he told me it would be another hour as someone had to come and finish repairing the frame.”

“But I knew he’d been on my phone, so I asked for it back, swiped up to see my most recent tabs, and saw that he was looking through all my photographs from years ago.”

The cops explained that while he looked at them, he technically did not download nor share the images, hence, not breaking any laws. She tried taking the phone back, but the man dared to snatch it back from her, ended up scratching her hand in the process.

“I felt completely violated. It’s creepy and perverted to go through someone else’s most private pictures without their permission.”

The shop manager, Malik Ali, explained, “We have resolved the issue in the presence of police. The worker involved has been sacked. We have apologized to the customer. Nothing like this will ever happen again in the future.”