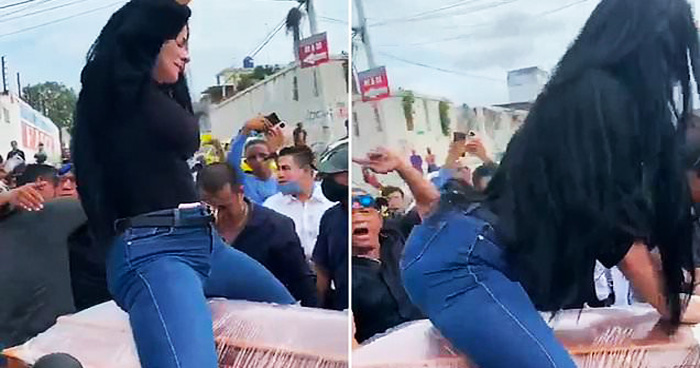 A funeral procession took an unexpected twist when a woman jumped on top of a coffin and twerk. Smartphone videos show the young woman dressed in a black top and jeans dancing to the song ‘Ella Quiere Hmm…Haa. Hmm by Emcidues, a reggae artist. Shaking her body in front of the cheering crowd and leaning over the half-opened coffin, the incident took place in the middle of a road in the city of Manta – the province of Manabí, Ecuador.

Woman Twerks On Coffin In Front Of Cheering Crowd

The 24-second clip has been viewed by over 10million people and the woman’s relationship with the deceased remains unclear. The coffin placed on top of two motorbikes also saw the woman leaning over to plant a kiss via the glass covering.

The deceased, identified as Marlon Mero Quijije, 35, was killed with numerous shots in an area known by the locals as seven stabbings, situated in the San Jose neighborhood. Marlon was shot three times in different parts of his body when walking in the aforesaid neighborhood but was declared dead at the hospital.

‘If your girl doesn’t do this at your funeral, is she really your girl? A Twitter user, identified as @OutsmokeChapo captioned the video, which has garnered over 93K likes. Comments on how the woman chose to bid goodbye to her loved ones got split reactions as some users pointed out her obvious sad expression while a few believe it’s an indecent way to send-off a loved one. What do you think?