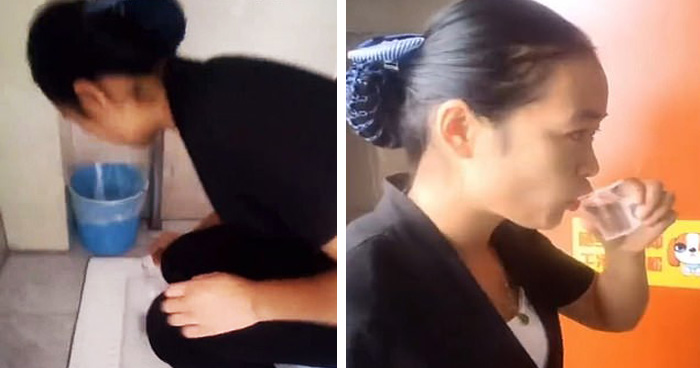 There is probably no better way to show that you did a great job cleaning a toilet than to show just how spanking bright the place is. But a female Chinese worker one-up that game by doing something even more extreme than just proving fishes can live there.

She proves her job-done-well by drinking from the very squat toilet she cleaned.

This 32-second video went viral on China and was reported that it was the female cleaner, whose surname is Luo, who offered to show how proud she is of her job. Without hesitation, she scooped a cup of water out of it and drank everything. All done in front of her supervisors and many more.

The firm she worked at praised her as an ‘exemplary employee’ and commended her dedication.

The woman was in full suit and her hair neatly tied in a bun. She explains that by doing this, she is encouraged to work harder and harder.

This video was taken at Zhong Cheng Fertiliser Technology Company in Shandong Province, China. This woman’s action sparked a debate in the community over whether her actions was truly necessary. Several criticized that such action shouldn’t have been permitted in the midst of a pandemic emergency.

The firm insisted that the water that she drank from was safe for ingesting, whilst the tap water in China is not safe to drink. They also revealed that she’s done this all out of her own will. As they lauded her actions, the spokesperson of the company encouraged their employees, “She is our example. This shows she does her job to the highest level.”