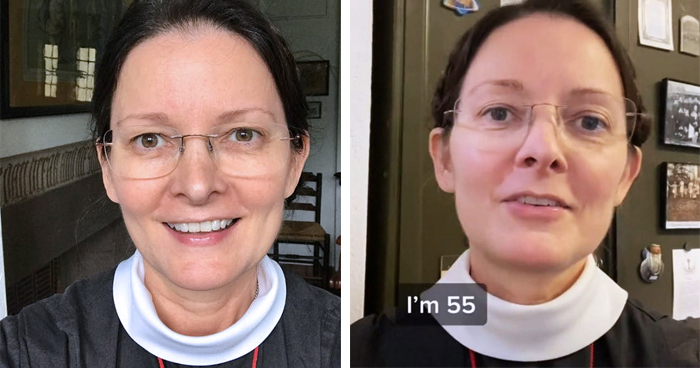 Sister Monica, an Episcopal nun whose real name is Claudette Monica Powell, shares her skincare routine with her 51k TikTok followers. The nun of TikTok has been going popular as she makes random funny videos about her daily life at the church.

Sometimes she posts about senior kittens. Sometimes about turkeys. This time, it’s her skincare routine.

“I thought people would be asking questions about transubstantiation and Gregorian chant, but the ladies want the nunly skincare tips.”

“People have been sending me direct messages asking what my skincare routine is. Which is really hilarious to me because I don’t really have one,” she laughs in the beginning.

She shares her youthful tips and the first one: “Low lighting is a girl’s best friend.”

It sounds like a joke, unless…? Sister Monica shares that she has been filming in places with good lighting (she has a past career in photography!). Ah yes, that is a familiar tip every famous TikToker will always tell you.

Another was to “carry a parasol” because apparently, she has never been able to go out in the sun since the late ’90s. “I get migraines from the sun, so I hate to walk around; I have to have a sunshade or an umbrella.”

She added this is why she has that “whole eccentric Mary Poppins” vibe. It was the parasol.

“I never use beauty products because I think it’s a rip-off… and because I’m really cheap.”

“My skin is allergic to just about everything on Earth,” she reveals the real reason. But she doesn’t neglect facewash, “I had to use things like that Aveeno, oatmeal-bodywash-slash-shampoo in the baby department at the grocery store.”

“Carry a parasol and shoot in low light, and use baby stuff on your skin,” she summed up her skincare class.

She assures us that she looks very much 55 in real life. But really, that no-filter TikTok video shows her skincare routine is worth following.

I thought people would be asking questions about transubstantiation and Gregorian chant, but the ladies want the nunly skincare tips. #nunsoftiktok