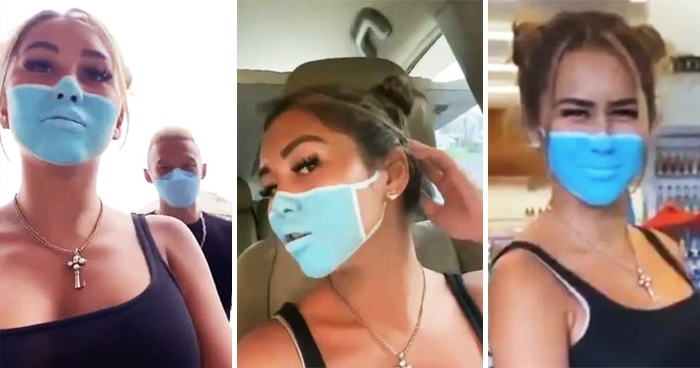 It seems that popular tourist destinations also tend to attract influencers that lack respect for local regulations. There is no reason for Josh Paler Lin and his Russian girlfriend influencer, Leia Se, to not wear masks in Bali, Indonesia.

But these two influencers launched a fake-mask prank inside a supermarket in Bali despite the strict mandatory mask regulation.

After garnering multiple negative comments from locals, the two were quickly reported and arrested. Currently, they are jailed at the immigration center and are awaiting their order for deportation to be carried.

After they were refused entrance by the security guard, US-based YouTuber Josh Paler Lin told his girlfriend that he has an idea. He painted Leia Se’s face in half in the same color as his mask.

The two managed to slip into the supermarket and Leia walked around without a mask.

The Taiwan-born influencer whispered to Leia, “Did you notice like no one’s actually looking at you?”

“Exactly, because it looks real,” she replied. The both of them were amazed at their illegal stunt as Josh commented, “No one noticed! Even the security. I can’t believe this works.”

Outspoken designer from Indonesia, Niluh Djelantik, brought attention to the prank and demand that these foreigners are to be dealt with.

She wrote, “Your exclusive prank will not be so exclusive anymore.”

“These two human beings have no empathy. They are treating the covid-19 as joke,” she continued.

“I am respectfully asking for the immigrations to deal with these two people. Do not let them trample on Bali’s dignity.”

“This reminds me of the cartoon animation, ‘Larva,’ the sh**-eating beetle made a similar mask, rode the subway, then got the virus and dies anyway… Thank you for listening.”

Head of the Police Department of Bali, Dewa Nyoman Rai Dharmadi, said, “This is an act that goes against our propriety. More than that, they deliberately provoked the citizens, which led to their heavier sanction that includes deportation on top of the fine.”

The foreigners are fined a total of Rp. 1m, or about $70. While deportation is usually given to repeat offenders, they’re deported right off the bat.

Hilarity ensues when Josh tries to defend himself that he wasn’t deported.

“Someone please tell this drunk Josh that the process to his deportation has been accelerated. This ma’am can’t tell him that because he blocked me. And now all of you know just how disrespectful they are towards a government institution’s verdict by calling it a ‘fake news.'”