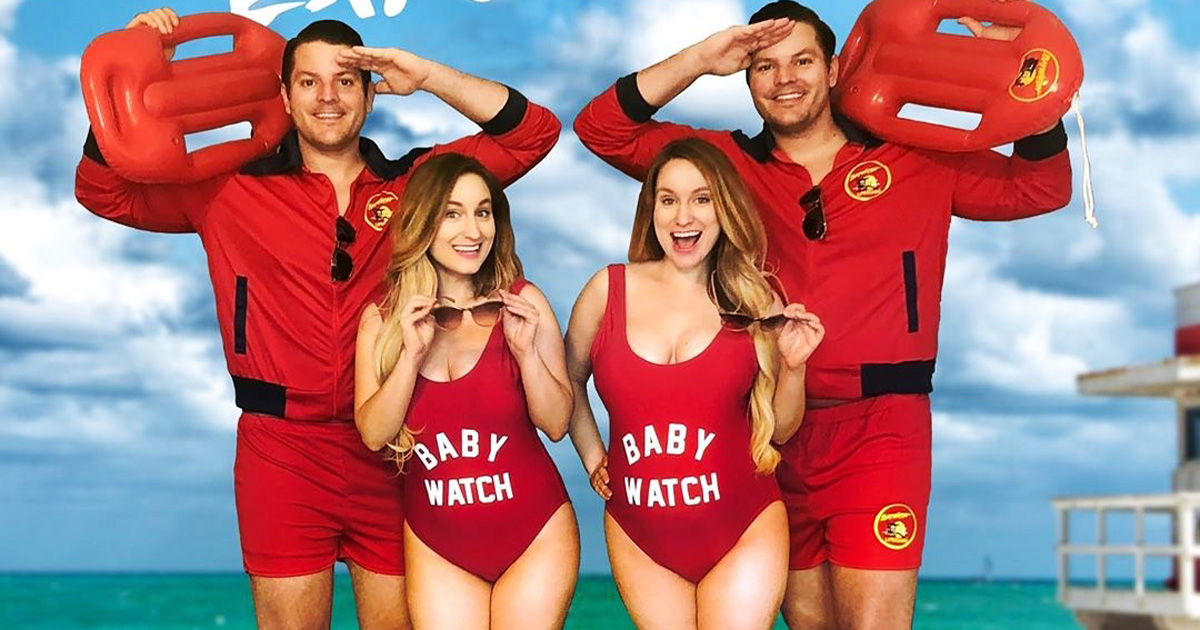 Brittany and Briana Deane are inseparable identical twin sisters from Virginia. Both 33, they married Josh and Jeremy Salyers, both 35-year-olds identical twins, in August 2018.

It didn’t sound like they could make things more incredible, but the siblings managed to surprise people by announcing that they’re expecting at the same time! The two had previously announced their wish to be able to expect at the same time.

The couple first met in 2017 Twins Festival in Twinsburg, Ohio.

The couple was elated to share the happy news. “We are thrilled and grateful to experience overlapping pregnancies,” they announced with a Baywatch-themed photoshoot. The two women wore red swimsuits with ‘Baby Watch’ written, while the guys looked ready to save people! Cute!

They also explained how this pregnancy is going to special for both couples. “Our children will not only be cousins, but full genetic siblings and quaternary multiples.”

The couples got married on the same day in identical wedding dresses, suits, and even had their wedding rings designed to be identical.

Speaking to Australia’s Today last year, Brittany said, “We have experienced most milestones of our lives together, birthdays, getting your driver’s license, graduations, and our double wedding. This would be the next huge event, and we’d love to experience it together, and ideally we will.”

Their wedding event was covered in a special TLC event titled “Our Twinsane Wedding” in 2019.

The couple had also recently celebrated their 2nd double-anniversary!

For Josh and Jeremy, finding a matching set of pairs they can fall in love and marry was their dream. “We got lucky enough to find them, we couldn’t be happier,” said Jeremy.

For the girls? The boys have to want to wear matching outfits as they do often and they seem to enjoy it! It’s definitely fun to see confused and surprised faces who can’t help it when they see two exactly the same people in exactly the same relationship!

One of their most recent notable matching looks are the masks!

Of course, everyone’s excited to know the chances of the two couples having identical twins of their own! Identical twins are not genetically inherited, but more understood to be a trait possessed by specific tribes. One thing’s for sure though, as Josh said, “If we’re all going to live under the same roof, then naturally we’re going to help each other raise our one big happy family that we have. It’s going to be great.”