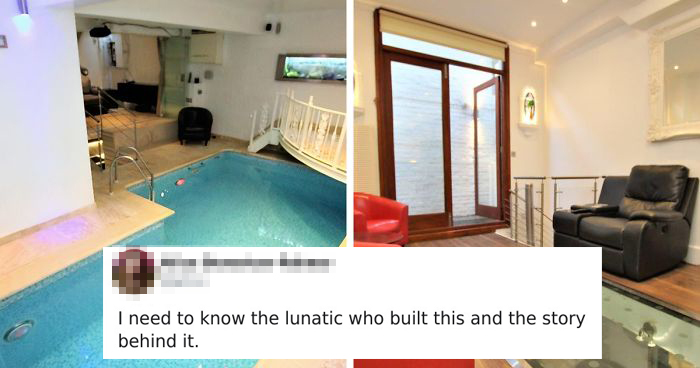 This Two-Bedroom Apartment Selling For $1.5M In London Goes Viral For Its Design Fails

A weird flat in Holloway has just emerged on the market, and so far people have a bunch of questions to ask. The purchase of a flat in London undeniably brings about a lot of thoughts – the price, the location, and importantly the indoor and outdoor designs.

You can tell that nothing comes cheap in London. Ranging from housing, clothing to even food, the ever buzzing metropolis is equally filled with surprises. The aforesaid flat, which surfaced on the internet is situated on Hornsey Road in Upper Holloway. It boasts of a shower room, a seating area, folding glass doors, a sauna, and a private pool.

Turns out, things aren’t the way they appear and interestingly it’s not everything that glitters that is gold. This listing has gotten quite a bunch of reactions from the internet for its hilarious architectural design fails and it’s downright hilarious.

The Fancy $1.5M Apartment Situated On Hornsey Road In Upper Holloway Has Its Own Private Pool

‘One of a kind. The luxury 2-double bedroom flat with a private swimming pool. The basement of the split level apartment features a shower, seating area with folding glass doors, W/c, luxury private swimming pool, sauna, and a kitchenette. On climbing the spiral staircase you will arrive at a walk-in wardrobe, bathroom with shower overhead, an open plan reception room with kitchen, small patio, and two double bedrooms. This property is immaculate and it’s truly one of a kind.’ The description of the property on Zoopla reads.

With the swimming said to be sitting right in the middle of the apartment, would you mind starting the day with a fresh breath of chlorine filing your lungs?

The Apartment Has A Total Of Three Fridges

Initially, the apartment was listed for £1,000,000, but shortly after the photos surfaced on the internet, the price skyrocketed to £1.2M, an equivalent of $1.5M. However, internet users aren’t that excited about the two-bedroom flat. A Twitter user who posted the listing had written: ‘We need to know the lunatic who built this and the complete story behind it.’

It Also Has A Small Patio

And Was Originally Listed For £1M

But After The Photos Surfaced On The Internet, The Price Skyrocketed To £1.2M, An Equivalent Of $1.5M

One Person On Twitter, Claimed To Have Been To The Apartment

And Instantly Other Users Reacted Expressing Their Opinions: