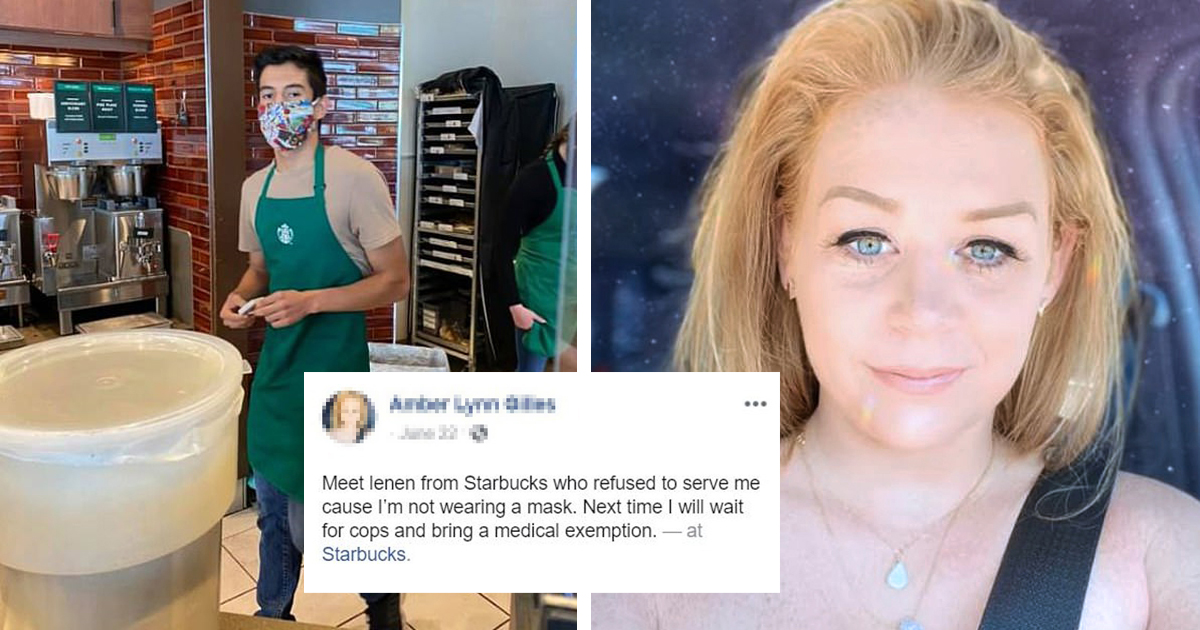 In a fresh twist of events, a Starbucks barista is laughing all the way to the bank after a fundraiser for the California based coffee shop raised more than $57,000 following a botched Shaming incident by a woman who claimed he wouldn’t allow her inside without wearing a mask.

Amber Lynn Gilles, a yoga instructor and photographer, was agitated after the incident that took place on June 22nd and took to Facebook to blast the barista for not serving her at a Starbucks in San Diego

‘Meet Lenen from Starbucks who refused to serve me cause I’m not wearing a mask,’ she said in the post, the coffee shop off the 4200 block of Genesee Avenue. ‘Next time I will wait for cops and bring a medical exemption.’

With the post going viral and being reshared more than 47,000, things didn’t turn out quite as the woman expected with people slammed her for the insensitive post.

His crime, Refusing to Serve Her Because she wasn’t Wearing a mask

Coincidentally, this came in time when the barista had already opened a Go find Me account under the name Ellen Gutierrez.

The post prompted Matt Cowan to establish the GoFundMe for Gutierrez, who he did not know. The two have been in communication and even made plans to meet. The Barista even sent out videos thanking his fans for the support.
‘I want to remind everyone to be kind to one another and to love each other and always remember to wear a mask,’ he said in a video.

The GoFundMe called, ‘Tips for Lenin Standing Up To A San Diego Karen’ has raised more than $57k in tips

The GoFundMe has raised just over $57,000 since it was initially posted on Tuesday. It is called, ‘Tips for Lenin Standing Up To A San Diego Karen.’

Gilles took to Facebook to defend her actions and to clash with those who were blasting her on her post.

‘I am not scared or bothered by your ignorant fraud a**’s, not so sorry you losers got nothing better to do.,’ she said on Tuesday. ‘Thanks for the ratings you all act like the terrorist organization you are.’

Ms. Lynne Didn’t want to Go Down Without a Fight

Starbucks, in it’s statement over the incident rallied behind the need to wear masks inside stores.

‘We want everyone to feel welcome in our stores,’ they said in a statement to CBS 8. ‘We respectfully request customers follow social distancing and safety protocols recommended by public health officials, including wearing a facial covering when visiting our stores.