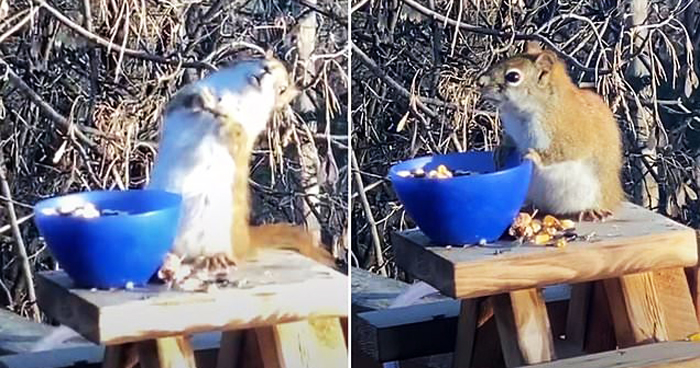 Have you ever imagined what happens when a squirrel ingests too many fermented fruits? Well, if you’re in search of a good laugh, then today is your lucky day. We stumbled upon a hilarious clip of an intoxicated squirrel, and we couldn’t just help but share it with you.

Let begin by saying, the squirrel wasn’t harmed; he just had a few too many pears. A woman, identified as Kathleen Morlok of Inver Grove Heights, Minnesota, filmed a squirrel who mistakenly got intoxicated from eating fermented pears outside her home. The video is hilarious as the squirrel starts to tip over, then balances itself before getting dazed.

Kathleen Morlok of Inver Grove Heights, Minnesota, filmed a squirrel who mistakenly got intoxicated from eating fermented pears outside her home.

Specifically, the squirrel used the edge of a bowl to catch its balance but started to drift backward while staring keenly at the surrounding trees. Quite bewildered, the tiny creature eventually found its way back into the bowl and continued to snack.

Morlok revealed feeding the squirrels is her hobby as it gives her something to watch out of the window while working from home, but added it wasn’t an intention to get the squirrel drunk. Morlok had cleaned out her refrigerator when she stumbled upon some old pears.

She admitted checking whether they were ok for squirrels to eat and placed one outside in the bowl she keeps on her deck.

One of the squirrel visitor, named ‘Lil Red,’ came around to grab the pear and then ran away up to the tree. About an hour later, Morlok noticed the squirrel returned for more pears but was acting hilarious and tipping back slightly.

‘The squirrel kept leaning back as he ate. This was when it occurred to me that the pears must have been fermented in the bottom of the fridge.’ Morlok explained. She admitted she was worried about the squirrel all night, but fortunately, it appeared fine the following day as it returned for a hangover breakfast. Nevertheless, the clip has amassed over 1.5million views since shared on the internet. Did you laugh-out-loud?