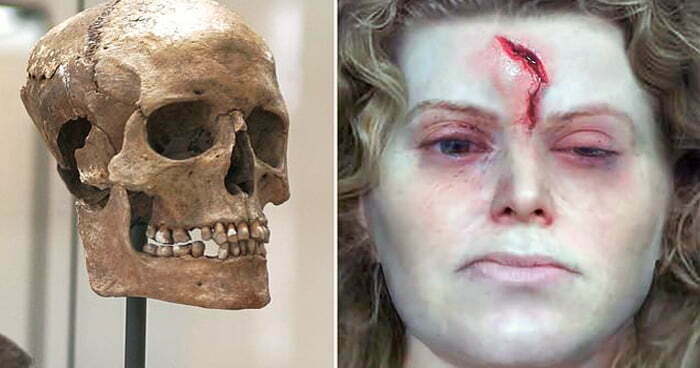 The battle-wounded face of a female Viking warrior, who had lived for more than 1,000 years has been re-created by Scientists.

A skeleton was discovered in a Viking graveyard in Solor, Norway and currently preserved in Oslo’s Museum of Cultural History.

With the remains identifying as a female, the graveyard had not been considered that of a warrior, mainly because the occupant was a woman, Ella Al-Shamahi, an archaeologist told the Guardian.

But the use of technology, British Scientists brought the female warrior to life by using a cutting-edge facial recognition device.

The battle-wounded face of a female Viking warrior, who had lived for more than 1,000 years has been re-created by Scientists via anatomically working from the muscles and layering of the skin

The scientists discovered that the woman was buried with a hoard of dangerous weapons, including a sword, an axe, and arrows. A dent was equally discovered on the woman’s face, which rested on a shield in her grave, similar to that of a sword wound.

However, it remained unclear if the brutal injury was the major cause of her death, but it’s believed to be the first evidence ever found of a Viking woman with a battle injury.

‘I am so excited. This is a face that hasn’t been seen for more than 1,000 years. The woman suddenly becomes really real.’ Ms. Al-Shamahi said.

Ms. Al-Shamahi, a specialist in ancient human remains is, however, prepared to present a National Geographic Documentary featuring the recreation.

The Viking Warrior Women airs on the National Geographic on 3rd December at 8 p.m.

Reacting, a senior lecturer at the University of Dundee in the Centre for Anatomy and Human Identification, Dr. Caroline Erolin, who also worked on the recreation explained: ‘The result of the reconstruction is never 100% complete, but it’s enough to generate recognition from someone who knew them too well.’

While the technology also reconstructed the woman’s grave, displaying the placement of the aforementioned weapons, the documentary features Ms. Al-Shamahi journeying across Scandinavia studying Viking burial sites and using the visualization techniques to recreate the contents.