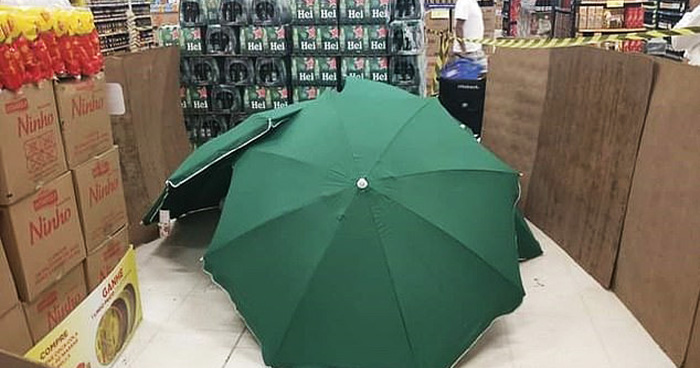 In a terrifying moment, a staff of the Carrefour Supermarket located in Brazil dropped dead amid work, and instead of locking up the store, his colleagues decided to cover his corpse with boxes and umbrellas. The incident, which occurred a few days ago came to the spotlight after photos of the insensitive treatment went viral on social media pages, sparking criticism, and an outrage.

Manoel Moises Cavalcante, 59, dropped dead amid work and instead of locking up the store, his colleagues decided to cover his corpse with boxes and umbrellas

Manoel Moises Cavalcante, 59, had suffered a heart attack amid working in the store. Reportedly, first aid was administered but Cavalcante gave up the ghost still. The Carrefour Brazil store went on to apologize revealing it’s handling of the incident was horribly inappropriate.

In a statement released, the store agreed to not closing the store instantly as well as not finding the appropriate way to look after the body. Carrefour also admitted that the staff was their sales manager who fell ill and given first aid before calling for an ambulance. On dropping dead, the store said it abided to its guidelines not to remove the body from its spot.

Turned out, the store has officially changed its guidelines, adding the compulsory shutdown of the store if such an incident ever happens again. ‘We honestly apologize and we are prepared to support his family in any way necessary.’ Carrefour added.

However, this isn’t the first controversial story about the store. Two years ago, a security guard at its store in Sao Paulo had murdered a street dog after beating it up with metal bar. The incident did summon animal welfare groups as well as rage on social media.

Ellen Page Is Now Elliot Page As He Came Out As Trans Officially On Social Media December 2, 2020