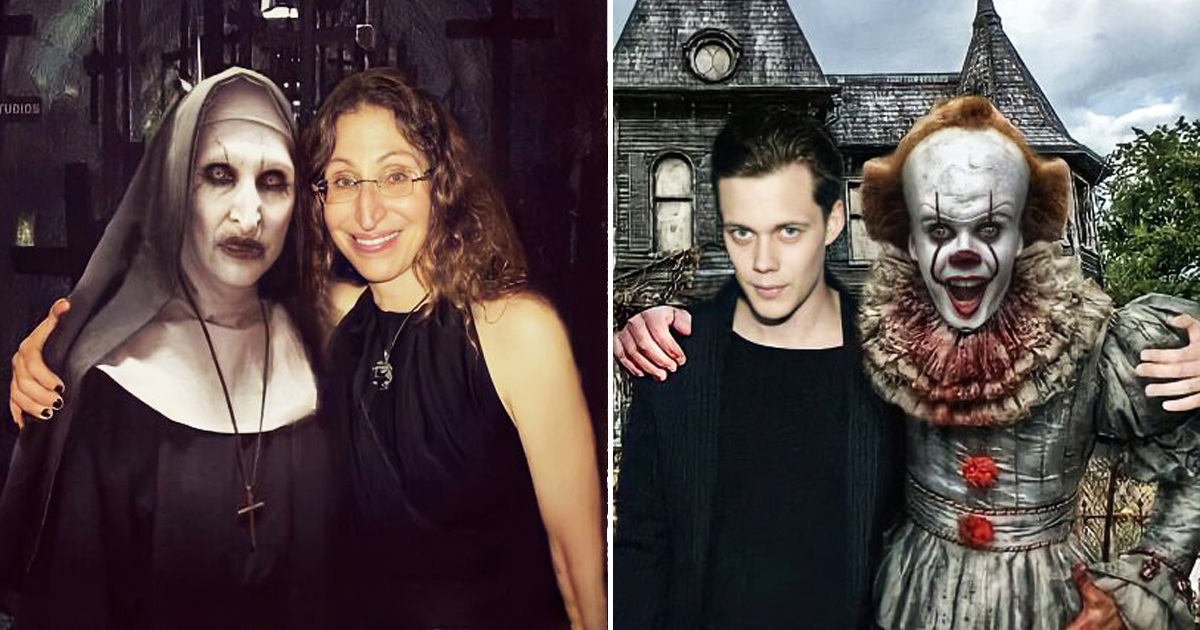 We grow up with many roles in our life. With role models, people praise and idolize and with villainous and scary roles that accompany our nightmares. Angela Norris from Fxattics Studios loves editing celebrities next to scary and horror roles they’ve done in movies.

The Brooklyn-based prop artist makes Halloween masks and other props as her job. Making montages like this was a recent hobby of her that gained popularity among her followers, and she decided to do it with other actors as well.

Bill Skarsgård: Pennywise from ‘IT.’

Have you ever thought about why people love horror movies? To some extent, horror movies actually provide comfort to the viewers. Some of you might find this statement unbelievable, but this study summarizes the three reasons as tension, relevance, and unrealism. The jumpscares and unreal sequences of events set down this tranquil feeling for the viewers divided by a single screen.

Daveigh Chase: Samara from ‘The Ring.’

Bonnie Aarons: Valak from ‘The Nun.’

Abby Moss who suffers from an anxiety disorder often worries about things way out of scale; a falling comet, terminal fatal diseases, fear of being a psychopath, etc. She told Vice, “I’m lucky that my anxiety is moderate enough for me to handle it without medication… But when it gets really bad, there’s one instant fix that makes me feel better: a horror film.”

Tim Curry: Lord of Darkness from ‘Legend,’ Pennywise from ‘IT,’ and Frank N. Furter from ‘Rocky Horror Picture Show.’

Robert Englund: Freddy Krueger from ‘A Nightmare On Elm Street.’

Dr. Mathias Clasen from Aarhus University from Denmark explains, “There’s psychological distance when we watch a horror film. We know it’s not real—or at least, some parts of our brain know it isn’t real. Other parts—ancient structures located in the limbic system—respond as though it were real.”

Another reason might be the hyperactive amygdala, common in people with anxiety, is getting used to scary experiences through horror movies. This is similar to exposure therapy that people who wish to cure their phobias go to.

Kevin Peter Hall: Predator from ‘The Predator’ and Big Foot By from ‘Harry And The Hendersons.’