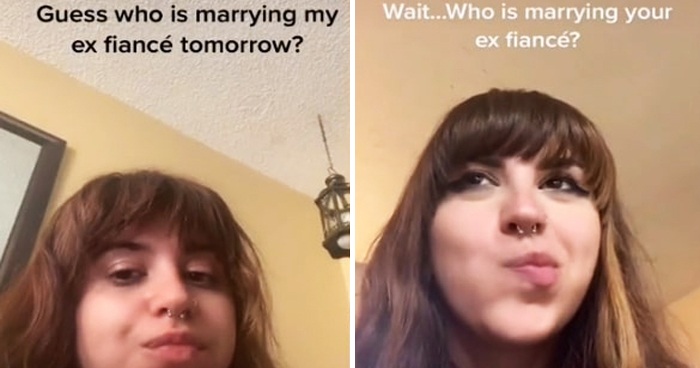 “My Mom Is Marrying My Ex-Fiancé, We Dated In School, And He Moved In With Us”

Marisa has experienced an ultimate betrayal! She couldn’t curtail her thinking and so took to TikTok to share the predicament with her followers. In a clip shared to the social media platform, the TikToker explained how her mom went behind her back to get married to her childhood sweetheart.

Marisa shared how her mum went behind her back to marry her childhood lover in a four-part clip.

Marisa and her now ex-fiancé had dated in high school, and to make it spicer, he had moved in her family – her mom and stepdad. Marisa and her Ex were both 16-year-old and, during that time, were engaged.

Part I of the story. Watch below:

“Yes, he’s my age; we dated in high school, and to make it even spicier, he moved in after we started dating.”

Part II of the tale. Watch below:

Aged 18, Marisa claimed she realized that she didn’t want to be tied down to someone she had met as a teen for the rest of her life. So she eventually moved out from her family house, which is precisely when her Ex started handing out her mum every day.

Marisa claimed the incident happened when she was 16 and that they were both engaged. (Part III).

She continued: “I asked her all the time, ‘why are you hanging out with my ex-husband?’ and her answer was always ‘oh he’s my son, and I love him, and I’m going to hang out with him whether you want to or not because you put him in my life and you don’t get to take him out.”

When she was 18, Maria realized she didn’t want to be tied down to someone she had met as a teen. (Part IV).

Last part of my mom marrying my ex

Marisa stated that she put a whole fight about the mentioned above and had pleaded repeatedly that her mom should stop doing such as it’s weird and makes her feel uncomfortable and strange. After a while, she stopped talking to her mom after fighting her on it, but one night, she got called, and amid their discussion, Marisa’s mom admitted that she was dating her Ex.

After some years apart, Marisa eventually got a call from her mom, who admitted she’s now engaged to her Ex.

I wish I was kidding….##fyp

“Then I stopped talking to her for about a year. And I’m not sure what happened in that year, they just got closer, and he moved in with her again.” Marisa shared that she also got pregnant with a different ex, so she moved from home as the relationship ended. During this time, her mom was still with her Ex. “I just had a baby, her birth is December 17th, and on Christmas Eve, she called me to tell me they were engaged,” Marisa noted.

In her last video (below), she told her followers that her mum and ex-fiancé were getting married ‘tomorrow.’

In an updated clip shared on Sept. 19th, Marisa told her audience that her mom and ex-fiancé were getting married. And as expected, her followers were left stunned, with many expressing their concern for Marisa in the comments. Some people noted it must be pretty painful and apologized to Marisa for going through this, while a few added that her mom has utterly been toxic her whole life.