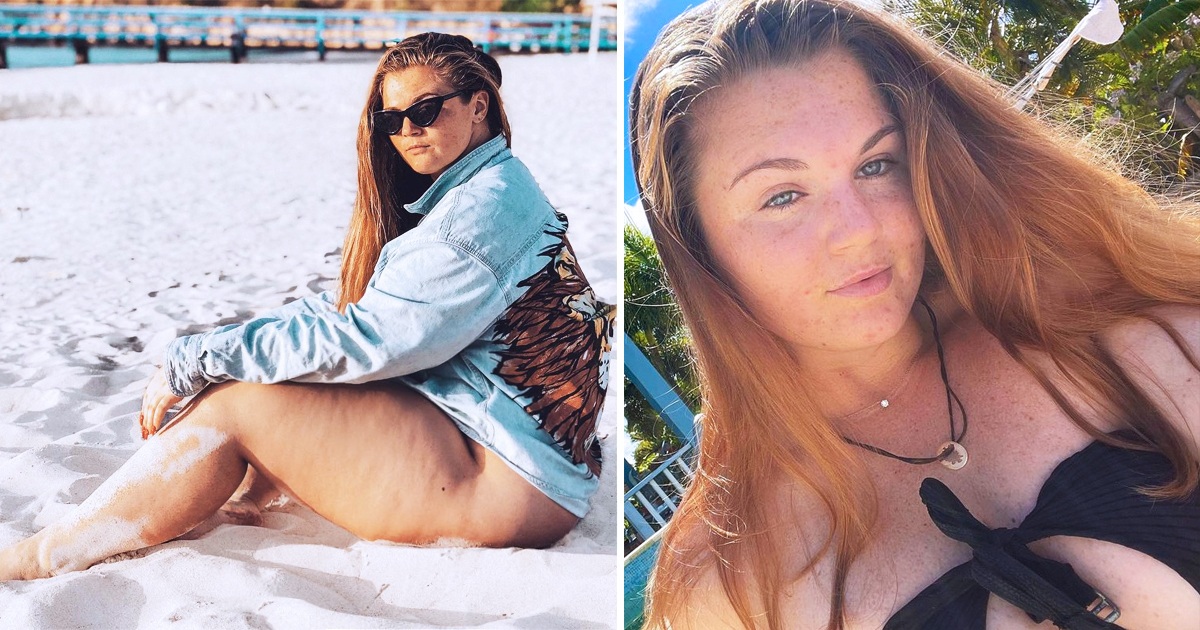 Savannah Sullivan who has lipoedema lost confidence in herself when she was constantly criticized by men on her huge legs. The 22-year-old felt ‘destroyed,’ but she managed to pick herself back up through gorgeous bikini snaps of herself.

The makeup artist now often shares awareness about lipoedema’s symptoms and how it affects people physically and mentally.

She recalls that boys used to call her names because of her size and used insults like ‘cottage cheese legs’ and ‘bingo wings.’ But it wasn’t as if she hadn’t tried because she’s attempted to go on diets and exercise, but she couldn’t regulate her weight.

As a kid, she was heavily bullied, “It was never nice because during childhood my legs and arms were always bigger than other girls. I didn’t want to wear the skirts that I had to wear for sports practices just because I could look around the room and everybody’s legs looked completely different to mine and I was like ‘well, what is wrong with me?'”

“I know I don’t eat excessively, I’ve always kept a healthy balanced diet. It was rough, kids don’t know [about the condition], you do get bullied, they always pick on the fat kid to put it quite bluntly.”

The woman spoke about her posting her own bikini snaps, “Posting full-length pictures is kind of reclaiming my body – ‘this is who I am, this is what I look like’ and ‘it’s ok to look like this, everybody is different.'”

“I’ve found posting on social media videos of my body and about my condition empowering and liberating.”

“It comes with its ups and downs. Somedays I look in the mirror and love the way I look. I love my size, calves, bum, and little belly or whatever, and other days it’s like I want to turn the mirror around and never see my body again,” the woman who originated from Antigua, Caribbean, added.

“I’m quite truthful with my posts. Sometimes it is really sh*t and that’s ok, and that comes with taking ownership of it.”

“You can’t have a flower without a little rain, it’s learning to love my body as the flower that it’s becoming while also appreciating the good days and the bad days.”

She’s been properly diagnosed with Stage 2 lipoedema earlier this year and will go through liposuction next year to help with her physical condition.

She reveals that men would actually tell her in the fact that her size is the reason she got rejected or dumped. Savannah shared, “It was like ‘you’re too big for me,’ ‘your legs are way too big,’ ‘I could never date a girl whose legs are bigger than mine.'”

“I think those were what really hit home. Boys would say that as an excuse for not going out with me.”

She continued, “It’s also the subtle things like, ‘why don’t we go to the gym together some time? I think that would help you’ and it’s like ‘ahh, shut up.'”

“It made me feel awful. It absolutely destroyed my confidence and that’s definitely stuff I still dealt with up until I got with my recent partner who is very accepting, understands, and has taken the time to learn with me about this condition.”

Ever since she knew about herself more, she wishes to share that knowledge to help others to learn about themselves.

“If anyone else is going through that and if I can post a video and lead them to look up lipoedema like I did, then that might change their life. I’m not saying I’m a life-changer or mystical guru, but if I can help just one person, then that would be nice,” she hoped.

“I’ve had lots of positive comments and private messages like ‘your TikTok’s really inspired me,’ ‘I didn’t know what lipoedema was until I saw your post’ and ‘I’ve discovered I’ve had it and been diagnosed’.”

Savannah feels totally elated when she hears those things because that moment of realization for others means they can look up for help to know they’re not alone and it helps raise awareness!