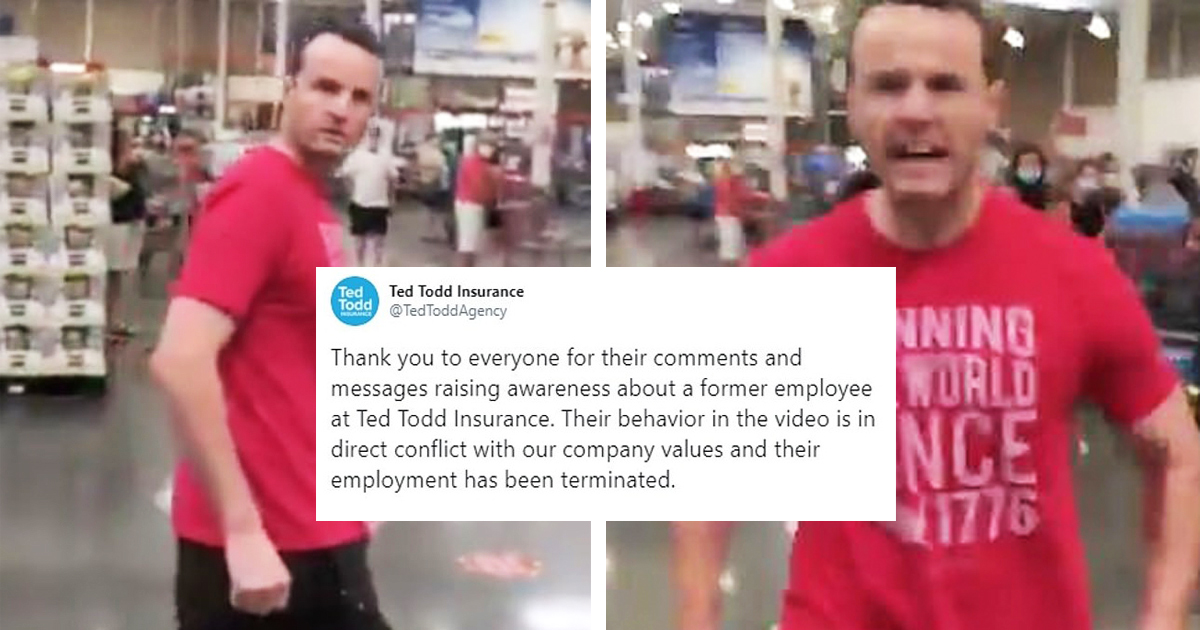 A Florida man has been laid off from his insurance job following a viral footage exposing how he accosted an elderly woman for asking him to wear a mask at Costco that sparked online outrage.

Daniel Maples was caught on camera having an outburst and was at the time a leading sales agent at Ted Todd Insurance.

The insurance agency tweeted on Tuesday in response to mounting public pressure over Maples’ behavior. In their statement, they stated his behavior was not in line with ‘company values’ and that he had been ‘terminated’.

The video has since been viewed more than 11 million times, leaving users horrified at Maples’ behavior.

Florida man at Fort Myers Costco in "Running the World Since 1776" shirt flips out on elderly woman who asked him to wear a mask and man who defended her #BecauseFlorida (via @profjaffar) pic.twitter.com/PDOvi33qHK

‘Threatening behavior and intimidation go against our core mission to be trusted advisors in our community,’ wrote the agency’s CEO Charley Todd in a follow-up tweet that addressed the company’s internal culture.

Maples had been wearing a ‘Running the World Since 1776′ t-shirt at the time of the incident, and was identified after Miami documentary filmmaker Billy Corben, originally obtained the video footage from the person who filmed it and shared it online.

The footage shows Maples approaching the elderly lady and a man believed to be defending her.

He says: ‘You’re harassing me?’ as he clenches his fists, to which the man replies: ‘I’m not harassing you, you’re coming close to me.’
The man continues to approach the pair as he yells: ‘I feel threatened, I feel threatened! Back up! Threaten me again! Back the f* up, put your f*ing phone down.’

One user said at the time, no one was approaching the man despite him telling customers to ‘back off’

One of the customers who was targeted said: ‘To give Costco the credit, they escorted him out and made me wait inside and monitored him until he left and then they sent someone with me to the car to make sure I’m okay.’

Twitter users expressed disgust at the uncivilized behavior. One said: ‘He kept saying “back off”. No one was coming toward him.’

Another wrote: ‘Shame on the managers at this Costco. Never should have let him in without a mask. Here in Hawaii, you have to wear it, or they’ll make you leave the store.’