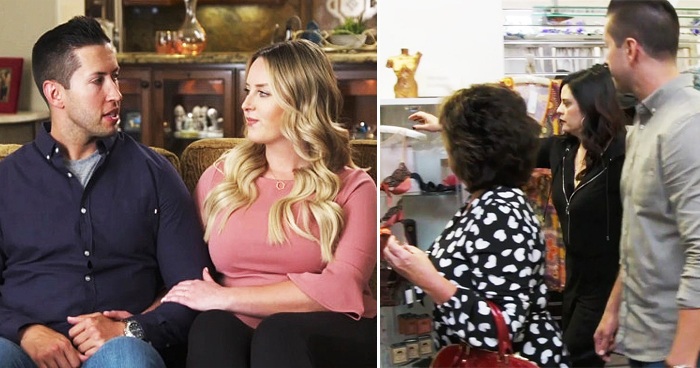 The longer a relationship has been going on, the more likely the intimacy phase might suffer. Valentine’s Day is around the corner, and no matter the situation or circumstance, it’s one perfect moment to reassure your significant other how much you care and love them deeply. In the new series of I Love A Mama’s boy, 29-Year-Old Matt proved he’s beginning to prepare for Valentine, but unfortunately, his actions towards purchasing a gift for Kim (his GF) has left internet users disturbed.

Matt is in a relationship with 26-Year-Old Kim, both from the United States, having met on a dating app for over three years

Matt is in a relationship with 26-Year-Old Kim, both from the United States, having met on a dating app for over three years. Kim had no clue that Matt would end up being the one and has countlessly fought with his 57-Year-Old mom for some alone time with her man. In the 1st episode, airing on Discovery+, Matt decided to spice up his and Kim’s sex life in time for Valentine’s Day by opting for some sexy lingerie as a gift.

However, Matt asked his mom to help pick out the most appropriate garment to reignite intimacy. Interestingly, Matt ended up purchasing matching lingerie for his GF and mom. ‘For Valentine’s Day this year, my mother said she would go and help me get Kim a gift. I want to put a little bit of spark into my and Kim’s relationship.’ Matt, via the episode,

In the 1st episode of I Love Mama’s Boy, Matt decided to spice up his and Kim’s sex life by opting for some sexy lingerie as a valentine gift

He added: ‘There’s some intimacy that has fallen short because we do live with my mom, and Kim thinks my mother sometimes around a little bit too much. If I ask my mother her opinion, I will get a sure guarantee of a good response.’ Amid the episode, Kim admits distracting Matt from his overprotecting mom hasn’t been an easy task even though she hopes to take their relationship to a whole next level.

Scanning through the lingerie shop’s hangers, Matt selected underwear for his mom to comment on, evaluating what she thinks Kim will like. ‘This is spicy.’ Kelly, Matt’s mom, responded. The son and mother were approached by the store owner –Yve, and confidently, Kelly explained what they were looking for.

The son and mother were approached by the store owner –Yve, and confidently, Kelly explained what they were looking for

Being much of an obvious embarrassment to Yve, Matt’s mom revealed her son (Matt) wants to get something for his GF with a little bit of razzle-dazzle for Valentine’s Day. Pushing past the awkward situation, Yve assisted in picking out a few options. ‘I do like cheetah, and I think it’s beautiful. It’s spicy, elegant so I don’t think we will have any problems.’ Kelly said.

In response, Yve gasped and said she doesn’t have many mothers and sons shopping for lingerie in her store, having been in the business for over 13years. Shortly after, Matt’s attention was drawn to a sexy, silky bathrobe, and he claimed Kim would love it. Without missing a second, Kelly expressed her interest, saying: ‘I would love that. I am her size; I can see me wearing that too.’ Yve’s stare of horror is understandable, especially as Matt decided to buy two of the same bathrobe for Kim and his mother, Kelly.

Pushing past the awkward situation of a mom and son coming to her store to purchase lingerie, Yve assisted in picking out a few options

While waiting for his purchases to be wrapped, Matt seized the opportunity to express his desire to pop the big question. Believing she has the final say in the matter, Kelly responded: ‘I think we can think about it and when it will happen?’ In response, Matt added: ‘I mean, fairly soon. I’ve been thinking of looking at rings. Kim found a ring at Tiffany’s that she likes.’

Matt’s attention was drawn to a sexy, silky bathrobe, and he claimed Kim would love it. Without missing a second, Kelly expressed her interest, saying: ‘I would love that. I am her size; I can see myself wearing that too’

Surprisingly, Yve bravely gave her thoughts on the subject matter, saying: ‘Hey, as long as your son is happy, you will be happy, and as long as his wife is happy, he will be happy. But the number one is going to be his wife now.’ Feeling uneasy as Kelly frowned, Yve quickly ran around the counter and hugged Kelly. Yve added: ‘Come here, I am sorry, but she’s going to be number one now.’

Nonetheless, Matt and Kim had experienced turmoil after a fire broke out at their apartment. It resulted in moving in with Matt’s mother, and since then, it became quite clear as to how close Kelly and Matt are. On the other hand, the I Love A Mama’s Boy is readily available for an exclusive stream on Discovery+ from Jan. 18th.